Home  »  “Be Best”: the new campaign of the first lady of the USA, Melania Trump, and why some question it?

“Be Best”: the new campaign of the first lady of the USA, Melania Trump, and why some question it? 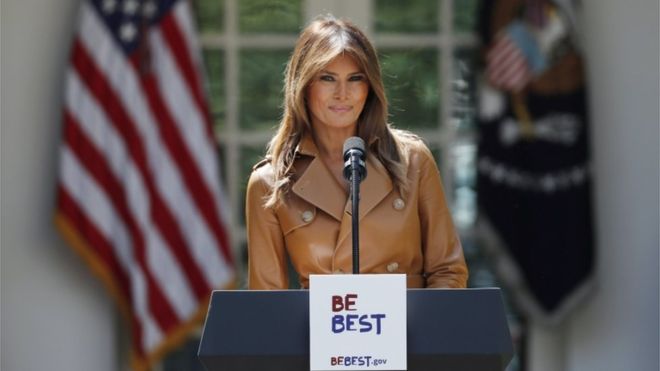 “Be Better”, the initiative that will mark Melania’s career as first lady.

Under that slogan, the brand new American first lady, Melania Trump, presented on Monday the initiative that will mark her career in the White House: a plan focused on the physical and mental health of children.

The goal, he said, is “to educate children about the many problems they face today.” And among them, he highlighted the abuse of opioids and Internet harassment.

“As a mother and first lady, I am concerned that in the accelerated and interconnected world in which we live, children may be less prepared to express or control their emotions, and often resort to destructive or addictive behaviors, such as bullying, addiction and even suicide, “he said.

The initiative will promote various programs, from aid for babies exposed to opioids to actions to protect children in the network.

“As we all know, social media can negatively or positively affect our children, but they are often used negatively,” said the first lady in an announcement made at the White House, in the company of her husband and important figures of the technological sector.

In the United States, it is traditional for the first lady to design and work on a great initiative during her time in the White House.

The plan chosen by Melania, however, has received many criticisms without even starting to walk: the first one by the slogan itself, that some came to ask if it was grammatically correct.

The controversy also focused on the similarity of her campaign “Be Best” (“Be Better”) with the phrase that Michelle Obama, her predecessor, popularized during the presidency of her husband, Barack Obama: “Be Better” (“Be Better” “).

After Melania presented her great initiative, in a quick search on Twitter you could find comments and a video of Michelle Obama urging men to “be better” in an interview with the famous television host, Oprah Winfrey.

In 2016, Michelle Obama encouraged men to "Be Better" pic.twitter.com/RtSz1tmETO

However, the great controversy of Melania’s mission lies in the online behavior of her husband , Donald Trump.

The most critics consider that Trump favors a climate of harassment in the network with its commentaries in Twitter – that commonly include insults -, while the White House denies it.

In any case, American policy experts considered the theme of the first lady’s campaign a great choice.

“Take advantage of the natural harmony you have with children,” Myra Gutin, a historian specializing in the career of first ladies at Rider University in Lawrenceville, told BBC.

“It seems that (the children) are friendly with her.”