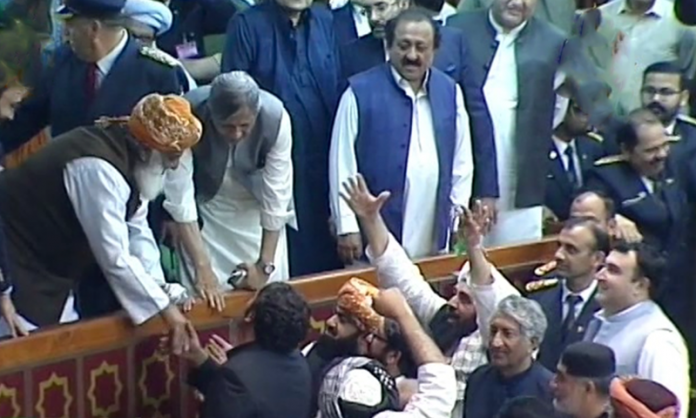 The opposition’s no-trust move against Prime Minister Imran Khan passed an hour after midnight on Sunday, with 174 members of the 342-member parliament voting in favor.

The outcome was declared by PML-N’s Ayaz Sadiq, who was chairing the session after Asad Qaiser resigned as speaker, after which Imran Khan ceased to be prime minister, as per Article 95 of the Constitution.

Imran Khan is the first prime minister in Pakistan’s history to be dismissed from office due to a vote of no confidence. Before him, Shaukat Aziz in 2006, and Benazir Bhutto in 1989, survived the moves against them.

Sadiq could not vote because he was chairing the session. Members of the PTI who were opposed to the party did not vote.

Sadiq had earlier given the floor to Shehbaz Sharif, the unified opposition’s nominee for prime minister, after declaring the results. Shehbaz paid gratitude to all of the joint opposition’s leaders and promised that the “new regime” will not engage in “revenge politics.”

“I don’t want to return to our old bitterness.  We want to put them behind us and move on. We will not seek vengeance or perpetrate injustice; we will not imprison people for no reason; law and justice will take its course,” Shehbaz remarked.

Asad Qaiser, the Speaker of the National Assembly, resigned minutes before voting began, claiming that he could not take part in a foreign plot to depose the prime minister.

According to legal experts, Qaiser’s resignation occurred nearly 15 minutes before midnight, which was the deadline for implementing the Supreme Court’s directives to hold a vote on the no-trust case.

According to several media accounts, the same bench that issued the April 7 order had scheduled a hearing for 12:05 a.m.

Prior to tendering his retirement, Qaiser stated that he had received “vital documents” from the cabinet, which he invited the opposition leader and Pakistan’s chief justice to see.

“In accordance with our laws and the necessity to stand up for our country,” he added, “I have decided that I cannot continue as speaker and must retire.”