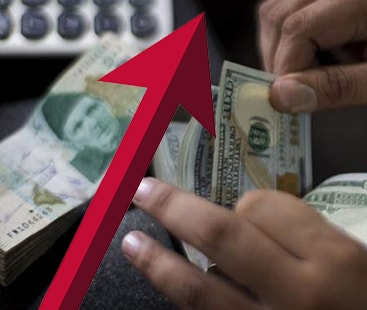 The value of US dollar against Pakistani rupee on Monday increased by 1 Rupee and hit another high of Rs156.85 in the interbank market.

Within just a week, the Pakistani rupee hits  new tops with a massive increase of Rs8.25, which in consequence has soared Pakistan s external debts by Rs820 billion.

In the previous week, Pakistani rupee was depreciated by 4.9 percent against the US dollar as the greenback gained Rs7.25 and touched another historical high.

In the interbank market, the US dollar closed at Rs155.85 on Friday, which in consequence had raised Pakistan’s external debts by Rs725 billion.

In the open market, the US dollar closed at Rs157.50, which in turn increased prices of goods, and hardships for the general public.

Besides, a massive increase in the value domestic of gold was seen in the previous week, with an increase of Rs4,200, reaching an all time high of Rs75,900 per tola.