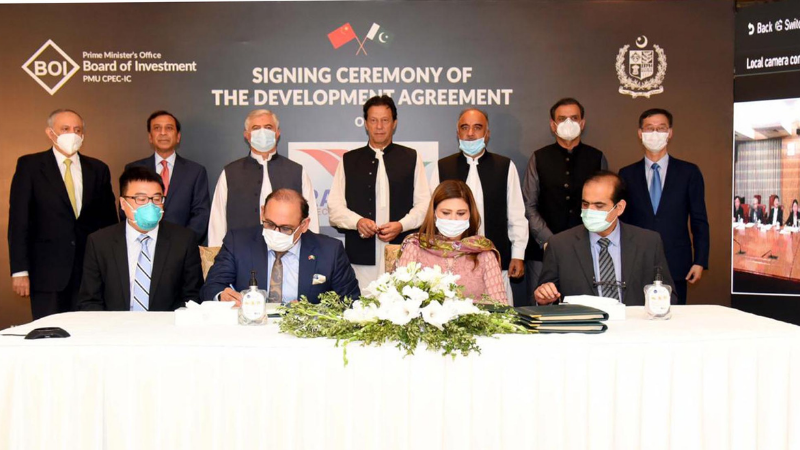 Prime Minister Imran Khan said the country has entered the phase of industrialization and the Chinese-Pakistan Economic Corridor (CPEC) will help boost the sector.

“Our strategic location and CPEC will pave the way for industrialization,” he said while addressing a ceremony held to inaugurate Rashakai Economic Zone on Monday.

Prime Minister Khan said the government’s priority was to provide local people with employment through the promotion of CPEC industrialization.

He also congratulated Chief Minister Mahmood Khan of Khyber Pakhtunkhwa (KP) for the agreement which, he said, would prove to be a significant milestone not only for the province but for the country as a whole.

He said out of four industrial zones to be developed under CPEC, Rashakai was given priority to promote business development and spur work opportunities for people at their doorstep.

A survey conducted by the United Nations had shown that Khyber Pakhtunkhwa was leading efforts to reduce poverty, he added, adding that people frequently travelled abroad or to other parts of the world to earn a living, leaving their families behind.

“My government is interested in providing job opportunities to locals at their doorsteps,” he added.

The ceremony was attended by Chief Minister Mahmood Khan, ministers, representatives of the Commision for National Development and Reforms, China and the CPEC Authority as well as other relevant officials.

Referring to Pakistan’s strategic position in the context of broader regional cooperation with Central Asian countries, the Prime Minister welcomed the launch of intra-Afghan dialogue in Doha, and said that Pakistan had played a crucial role in the peace talks.

If there was peace, it will lead to broader regional connectivity up to Central Asia, he added, adding that Uzbekistan’s deputy prime minister had recently visited Pakistan and illustrated his keenness on a railway line from Mazar Sharif to Peshawar.

In addition, ML-I will prove vital to regional connectivity and reduce travel time between various cities, he added, adding that it would also increase cargo operations, promote business as well as costs.

Pakistan’s strategic position would prove beneficial for trade and industry, particularly in KP, which had remained on the front line in the war on terror and had made considerable sacrifices, said Khan.

For CPEC, he said through agreements they were going ahead from the communication linkage stage to the growth of industrialization.

“Our next phase is industrialization. During the 60s, the nationalization drive had affected the country’s economy and exports. The Chinese industry wanted to relocate and Pakistan offers a very attractive environment with complete incentivization,” he added.