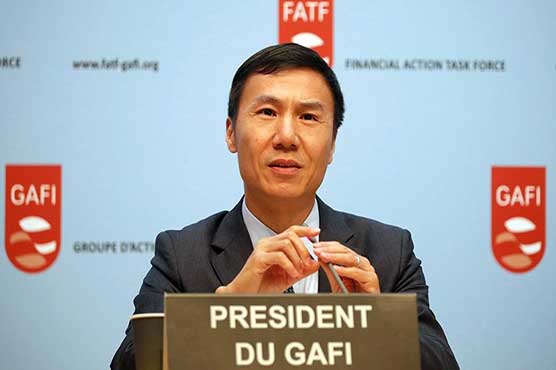 Pakistan to remain on Grey List till Feb 2020: FATF President

Financial Action Task Force (FATF) President Xiangmin Liu, while expressing satisfaction over steps against terrorism and corruption, has on Friday announced that Pakistan will remain on its Grey List till February 2020.

The decision was taken after a five-day plenary of the FATF. The intergovernmental organization has urged Pakistan to address all tasks that have been given to it till February 2020.

Earlier, a Pakistani delegation led by Minister for Economic Affairs Hammad Azhar told the FATF meeting that Pakistan has made positive progress in 20 out of 27 points.

The FATF examined the compliance report of Pakistan in its meeting and expressed satisfaction over new risk assessment study of Pakistan. Brotherly countries, including China, Turkey and Malaysia, have supported the stance of Pakistan.

The Pakistani officials assured the FATF that Islamabad adheres to all FATF targets and anti-money laundering laws have been made according to international standards.

The FATF will determine how convincing and satisfactory are the steps taken by Pakistan to curb money laundering and terror financing, while the action plan given on April 29 is also being reviewed.

Sources further said that the FATF has progressed on the 90 percent targets of the FATF and terror financing had been stopped, while bank accounts of all proscribed organisations were frozen and their assets confiscated.

Pakistani delegation presented a report in the meeting where question answer session would continue further.

According to a mutual evaluation report issued on Oct 2 by the Asia-Pacific Group (APG) – a regional affiliate of the FATF – Pakistan, out of the 40 recommendations, has shown compliance in one, Financial Institutions Secrecy Law, and has shown noncompliance in four areas, outlined brokerage firm Topline Securities in its report.

“However, Pakistan is partially compliant on 26 and largely compliant on nine recommendations,” it added. It further highlighted that Pakistan has shown appropriate progress since Oct 2018.

Pakistan, among many other measures, has effectively complied with one of another strong conditions put forward by the Asia Pacific Group (APG) – a regional affiliate of the FATF – to implement measures for curbing black money in the real estate sector.

Pakistan has undertaken a plan to establish a ‘Real Estate Regulatory Authority’ to restrict black money in the sector.

The Security and Exchange Commission of Pakistan (SECP) prepared an initial draft the establishment of the authority in accordance with the standards of the FATF.

The country will ensure that lands and properties are not transferred in the name of any terrorist organizations or banned outfit. However, matters pertaining to taxation on the real estate sector are excluded from the scope of the authority.

Moreover, federal institutions will support the formation of the Real Estate Regulatory Authority – that will make it mandatory for businessmen who are involved in the real estate businesses to register themselves with the authority and essential documentation of the businesses will follow.

Importantly, a report finalised by the SECP mentioned that the comprehensive guideline developed by the Commission has helped financial institutions to generate 219 Suspicious Transactions Reports (STRs) in just one year, as compared to 13 STRs in eight years.

In order to comply with the FATF’s standards, it has developed a set of regulations –SECP AML/CFT Regulations – in June 2018.

This year, Pakistan has made significant improvements in its systems to fight money laundering (ML) and terror financing (TF) as per international standards.

In an exclusive interview with Al-Jazeera TV in September, Prime Minister Imran Khan alleged that New Delhi was trying to bankrupt Pakistan and push it into the FATF blacklist.

As a result, Pakistan is now required to submit quarterly progress reports, instead of biannual, to the APG, starting Feb 1, 2020 to show improvements in its technical standards on AML/CFT.