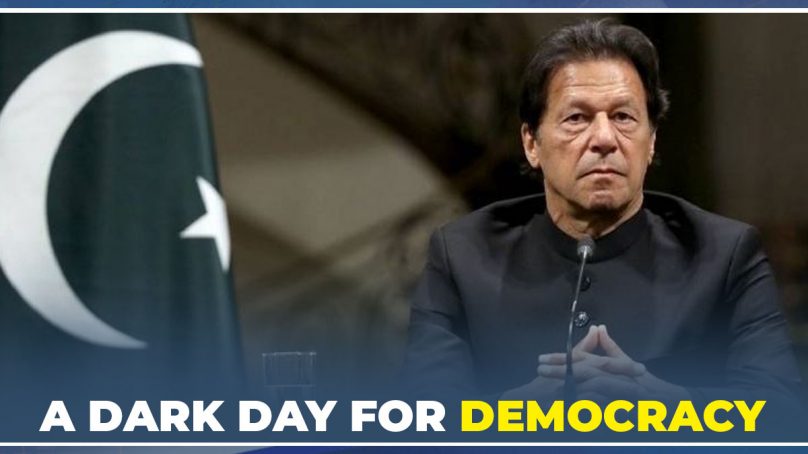 The entire country is shocked to the core. The prime minister had repeatedly indicated that he had a ‘surprise’ up his sleeve in the run-up to the vote of no-confidence. Even while political analysts and the media expected the end of Imran Khan in the no-trust vote, he appeared unfazed.

No one could have foretold that his final ruse would entail a democratically elected party torpedoing the democratic order. Pakistan has been pushed into a grave constitutional crisis, with the parliamentary process eroded on the orders of a leader who has invariably held it in deep contempt. In hindsight, it appears that Mr Khan had intended to play this wicked card all along.

It was a painful awakening: for a self-styled ‘fighter’ to engage in such foul behavior is quite a fall. Mr Khan has struck a fatal blow to democracy by setting aside the rules of the game rather than facing the situation head-on, raising the serious apprehensions that he is unfit to hold public office in a democratic society.

Whatever occurred in parliament on Sunday was in violation of all House rules, including those regulating the no-trust move. It was evidently preplanned: as soon as the parliament gathered, it was clear that the opposition had the numbers to topple the prime minister. Nevertheless, before the motion could be put to a vote, the newly appointed law minister rose to file an ‘objection’ under Article 5 of the Constitution, which declares that “loyalty to the State is the basic duty of every citizen.”

The deputy speaker, who was forced to preside over the proceedings since the opposition had also tabled a resolution of no-trust in the speaker, lodged the objection with unseemly alacrity. The deputy speaker dismissed the proposal on the grounds that it contradicted Article 5 without a scrap of evidence that the motion had anything to do with any of its movers’ loyalty to the state.

Before the public digest the shock, Mr Khan, who remained absent from the session, appeared on national television, congratulating the country on the ‘failure’ of the resolution of no-confidence and revealing that he had previously written to the president to dissolve the Assembly so that new elections could be held. He had been barred from doing it earlier because he could not dismiss the Assembly while a vote of no-confidence against him was pending. His request was granted by the president, who immediately dismissed the National Assembly with needless haste.

Mr Khan’s startling choice to appoint Pervaiz Elahi as Punjab chief minister over his own supporters appeared to be a betrayal of principles, but his actions on Sunday proved that he also lacks the courage and patience to be the leader he aspires to be. Given the clear narrative he had created leading up to the vote, he might have played the political game like a genuine sportsman and still come out stronger from the setback. Instead, he opted to throw the country into disarray by causing a constitutional crisis. The president, too, failed to act wisely: instead of examining the process’s legitimacy, he acted as an Imran Khan loyalist and tarnished his office with his politicized decision.

The ball is now in the Supreme Court, which has to decide the case. Meanwhile, other elements appear eager to promote the idea that because a new election has already been called, everything should be left alone. This line of thinking must be fought at all levels since it aims to legitimize any unconstitutional action used to impose this outcome. The apex court, hopefully, will provide a proper remedy for the offence and remind all parties that there is only one path to legitimate authority, and that path is always through the Constitution. Nothing less than that would do.