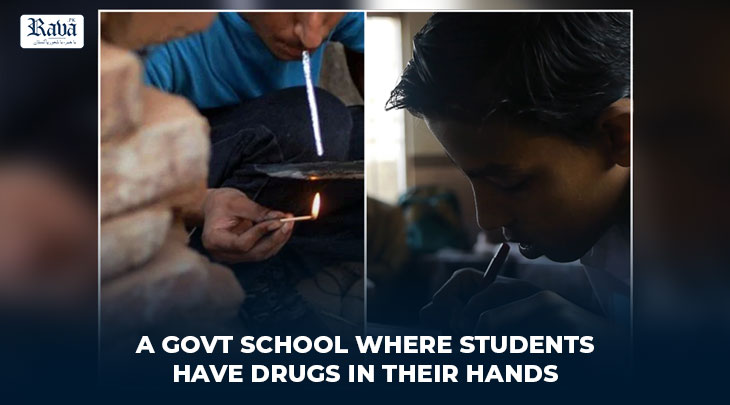 A Govt School Where Students Have Drugs in Their Hands

The word ‘school’ conjures up an image of a clean and safe building, where well-dressed children in uniform are reading to their teachers sitting at their desks in the classroom. Sadly, not all schools in Pakistan elicit the same picture; rather, they are the forsaken places where young children come to wreck their future.

Karachi’s Ibrahim Hyderi Sindhi Government Primary School is one such unfortunate institution, where, instead of books, children have drugs in their hands. Though only a handful students have taken to drugs, the activity is seriously affecting other pupils in the school.

In this regard, we met the principal of this school, Faiza Fatima, who talked about the institution in detail.

He says that when she was posted in the school, the first issue she encountered was the donkey cart tied at the gate while the children were terrified as to how to get inside. There was a pile of garbage. “Psychologically I was very upset. This was the situation at the gate and I was not facing them all from the first day,” Fatima shared.

“The condition of the children was also very bad. Someone’s shirt was dirty. No one had shoes. Someone’s hair was growing. It seemed that this was a road, not a school. The trucks were all passing by. First, I came and closed it. Then I focused on the children. Then I looked at the school building and saw the needs of the children,” she added.

“They used to pick up stones and beat each other and tore their heads off. This is because they used to beat them at home. If they came to school, they would beat them. I explained that drugs were being sold openly in the school. The 17-year-old boy was sitting in the primary school. Then I called the police and the Rangers, and had the children involve in other activities.”

She said that this was the first school here where project-based learning started. “During break timings, drugs were being sold openly. Raids conducted by the police prevented some miscreants from coming to the school. I was threatened with dire consequences for informing the police about this heinous activity on the school’s premises.”

“But the rescuer is bigger than the killer. He also broke my arm. A woman was sent here who had become the mother of a child and she attacked me and that only because I forbade selling drugs at school. I was forced to leave this place. I had sent a complete report from here. The then Special Secretary was very supportive, and the Sindh Education Department took notice.”

In this regard, we contacted the ruling party of Sindh, PPP, and the representative of this area Agha Rafiullah and asked for the government’s position. He said that our main objective is to bring children to school and educate them in a safe environment. He said that the construction work of this school is also in progress while the process of teaching in the college and secondary school on its premises is also ongoing. He further said that Sindh government is also working for the construction of more school buildings in Malir district. These schools include 11 primary elementary schools on priority basis of Gadap Town Malir. Bin Qasim Malir has thirteen primary elementary schools

We also sought the viewpoint of Madam Sadiqa Salahuddin of IRC and she said that in 2010 we had provided teaching staff not only to Ibrahim Hyderi’s Sindhi Primary School but also to 25 more schools under Pakistan Poverty Alleviation Fund. While we had given nine teachers and staff to Ibrahim Hyderi Sindhi Primary School with the grant received under Sindh Education Foundation, now it is not possible for us to provide teaching staff due to lack of funds.

Speaking to us, Seed Pakistan, an NGO working for the same school, said that the organization had opened a vocational training center at the school, which provided free IT beautification and sewing and embroidery classes for girls. The girls were also given one-time meals for free. But due to the pressure of some unknown elements they closed their vocational training center. They said that we have run a lot and adopted this primary and secondary school.

In this context, we also tried to talk to the SHO of Ibrahim Hyderi police station, who refused to comment on it.

Ibrahim Haideri Karachi is the most backward area of ​​Korangi. The problems of sanitation, education and poverty in the region are gradually increasing over time. The authorities are requested to ensure the provision of basic facilities in the schools in this locality and the security of children and teachers should also be made strengthened.