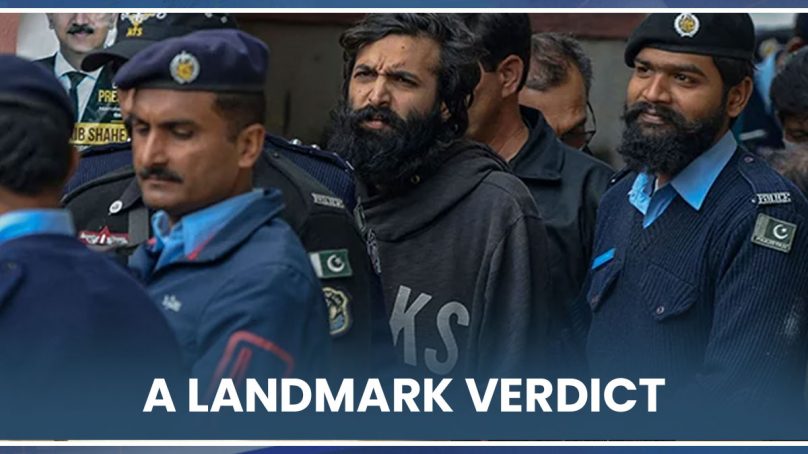 THE verdict in one of Pakistan’s most widely watched murder trials in recent memory has been delivered, and it struck a chord with millions who believed that the murderer merited condign punishment for the gruesome crime he had committed.

Zahir Jaffer, the main suspect in the murder of Noor Mukadam, was sentenced to death by a court in Islamabad on Thursday, while two co-defendants, both members of his household staff, were sentenced to ten years in prison. Since Noor, a 27-year-old woman, was found slaughtered and decapitated in the capital city on July 20 inside the killer’s home, the case has kept the nation on tenterhooks.

The CCTV footage later released showed Noor attempting to exit the house several times but being pulled back in each time by Zahir, with the gardener and watchman — both of whom were also convicted — assisting in her murder.

Several concerns arose in the public conversation during the probe and trial, including violence against women, the criminal justice system’s ability to really dispense justice, and, most unfortunately, the victim’s character.

While the defence is free to pursue any method it sees appropriate, it is sad that casting doubt on a woman’s character is considered as the simplest method to undermine the prosecution’s case by suggesting that the victim’s own choices contributed to her tragic fate.

The fact that Noor’s devastated father had to continually vouch for her character in front of TV cameras to counter what was being said in the courtroom betrays utter shame and ignominy. But such is the state of affairs in this patriarchal society.

Hearteningly, the judge ruled on the quality of the evidence placed before him, which the police had done well to muster despite stated pressure on different fronts.

However, it must be noted that the same socioeconomic position of both families may have influenced the outcome. Killers with money and clout can and go scot-free in a country where murder is compoundable and a crime against the individual rather than the state.

While the murderer has been handed the death sentence by the court, it’s expected he will approach higher courts against the ruling, as is his right. But the courts must take into account all the merits and incontrovertible evidence of the case based on which Zahir Jaffer has been condemned to death.

If the murderer’s lawyers manage to manipulate the case and convert the death sentence into even life imprisonment—let alone acquittal—that would serve to erode people’s confidence in the justice system, turning the high-profile case into a damp squib.

It’s hoped the courts will not be bilked by any manipulation and uphold the current verdict, which resonates deeply with the sentiments of the people.