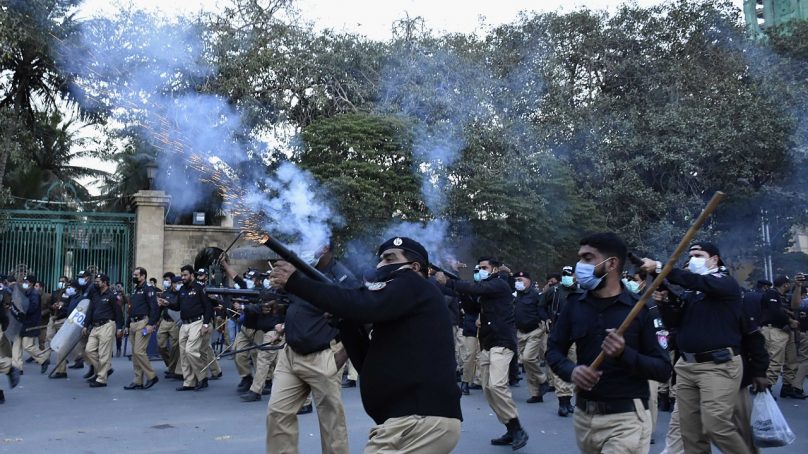 A Sigh of Relief

The political temperature in Karachi has finally come down, following a tense few days in which a resurgence to the ethnic violence—a norm in the ’90s—was being feared.

The metropolis saw almost all opposition parties of Sindh stage protests for several weeks against the local government law by the PPP-led provincial government. At the vanguard of this campaign was the Jamaat-e-Islami, which had been protesting in front of the Sindh Assembly against the law for nearly a month.

While the JI was poised to extend the scope of its movement, violence erupted in the city on Wednesday when an MQM protest in front of Chief Minister House went berserk, forcing the police to intervene with highhanded tactics. A clash between police and MQM supporters ensured, resulting in the death of a Muttahida activist Aslam Khan; however, it’s still not clear whether he died of police violence or a heart attack, as claimed by the PPP.

In the wake of this event, there were fears of a renewed wave of ethnic and political violence in the metropolis. Thankfully, however, it did not happen as the agreement between the Sindh government and the JI on Thursday night led to the end of the protest. One hopes the development will result in a political solution to the LG hullaballoo, and the resolution of differences on the streets will be shunned.  It’s also heartening that Chief Minister Murad Ali Shah and MQM leader and Federal Minister Aminul Haq decided not to give the death of the MQM worker an ethnic colour.

True, protest is every citizen’s inalienable right, but violent protests on the streets, not least with ethnic dimensions, do not bode well for democracy.  The PPP and the Jamaat-e-Islamic, therefore, deserve a pat on the back for resolving the conflict peacefully and democratically.

Now the PPP is expected to make good on the promises it has made to the JI, including handing the elected Karachi mayor powers to supervise major civic issues such as water, sewage and waste disposal, as well as health and education. The opposition parties have done right by highlighting the genuine grievances of the people of Karachi, especially with regard to civic services.

It’s widely assumed — and rightly so — that civic service delivery in Karachi has deteriorated in recent years, particularly since the PPP repealed the Musharraf-era LG law. Karachi’s broken roads, heaps of trash and overflowing gutters reflect this. Therefore, it behoves the PPP to include the legitimate amendments demanded by the opposition parties into the LG law, or face more protests in the days to come.