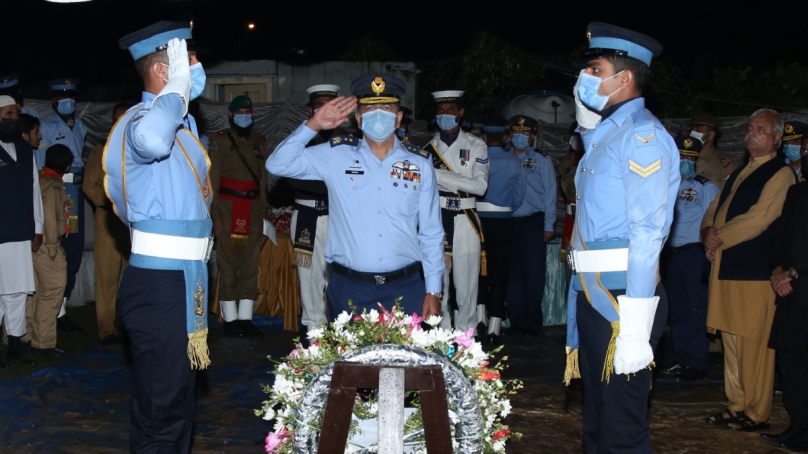 10 October 2021: Former Chairman Joint Chiefs of Staff Committee and Chief of the Air Staff Pakistan Air Force, Air Chief Marshal (Retd) Farooq Feroze Khan who expired in Islamabad due to cardiac arrest, was laid to rest at PAF graveyard Nur Khan with full military honors. A smartly turned-out contingent of the Pakistan Air Force also presented a gun salute at his grave. After the burial, floral wreaths were placed at the grave of the deceased on behalf of the President of Pakistan, Prime Minister, Chairman Joint Chiefs of Staff Committee, Chief of Army Staff, Chief of Naval Staff, and Chief of the Air Staff, and other dignitaries.

On this sad occasion, Air Chief Marshal Zaheer Ahmed Baber Sidhu, Chief of the Air Staff, Pakistan Air Force has expressed his profound grief on the sad demise of former Chief of the Air Staff, and Chairman Joint Chiefs of Staff Committee Air Chief Marshal (Retd) Farooq Feroze Khan. The Air Chief extended his heartfelt condolences to the bereaved family and prayed for the eternal bliss of the departed soul. Lauding the meritorious services of the late Air Chief Marshal, CAS said that ACM (Retd) Farooq Feroze Khan was an epitome of Professional excellence and grace, and would remain a role model for the coming generations of PAF officers, airmen, and civilians alike.

Born on 17 August 1939 ACM (Retd) Farooq Feroze Khan joined PAF after completing his Senior Cambridge from PAF Public School, Sargodha, and was selected for training at the USAF Academy. He was commissioned in PAF on 04 January 1959 in the 27th GD(P) Course. A graduate of Fighter Leaders School, Khan commanded No 9 Squadron, No 33 Wing, and two fighter bases-PAF Bases, Sargodha and Masroor. He also had the distinction of commanding a Fighter Wing in the United Arab Emirates Air Force for three years. He participated in both the 1965 & 1971 wars; and was awarded Sitara-e-Basalat for his bravery and valor. He was also decorated with Nishan-e-Imtiaz (Military), Hilal-e-Imtiaz (Military), Sitara-e-Imtiaz (Military).

Some of his prominent Staff appointments included Personal Staff Officer to the Chief of Air Staff, Assistant Commandant of PAF Air War College, ACAS (Plans), AOC Southern and Central Air Commands, DCAS (Operations), and Vice Chief of the Air Staff. He was seconded to Pakistan International Airlines as Managing Director before assuming command of the PAF in 1991. He served as Chief of the Air Staff, PAF from 09 March 1991 – 08 November 1994. He also held the prestigious appointment of Chairman Joint Chiefs of Staff Committee from 10 November 1994 – 09 November 1997. The late Air Chief Marshal also served as President of the Pakistan Hockey Federation during 1990-91.