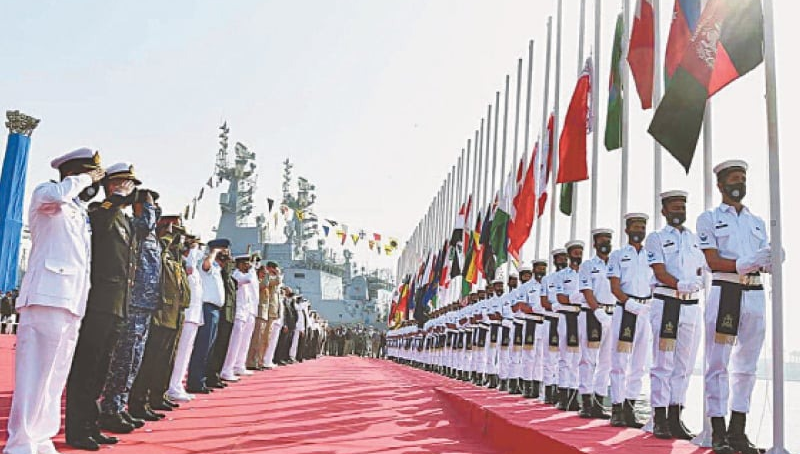 “Maritime security being quintessentially cooperative rather than competitive.”

The end of the Cold War witnessed the emergence of non-traditional security challenges in the international political arena. Globalization enhanced interdependence on one hand and on the other raised multinational and international threats, which emerged in the significance of security policies and strategies to secure national interests. Blue diplomacy shifts the dynamics of politics toward the ocean, making the ocean a source of economy. With this realization, states develop their maritime security strategies and took different initiatives for protection from miscellaneous threats of illegal activities like piracy, human trafficking, drug trafficking, and smuggling of drugs and armaments.

Historically seen the main purpose of establishing navies, is to exert influence beyond their shores entails additional responsibility to further strategic stability and peace at sea. Despite remaining vigilant to defend its sea borders, Pakistan Navy has constantly been engaged in contributing its share in the regional and international maritime realm to comply with the international obligations for collaboration. It has been a part of many UN peacekeeping missions and UN-mandated Combined Maritime Task Force 150 (maritime security and counter-terrorism) and 151 (counter-piracy). The main objectives of these Task Forces were to counter terrorism, prevent piracy, reduce illegal activities, and secure the maritime environment. Since 2006, piracy incidents enhance around the world and their peak was witnessed from 2009 to 2011 (410 in 2009, 445 in 2010, and 439 in 2011) respectively in the Red Sea, Arabian Sea, Persian Gulf, Gulf of Aden, and Somalia Basin. Enhancing these initiatives further, Pakistan Navy instituted Regional Maritime Security Patrols (RMSP), an initiative to continue support to uphold international efforts in the region. The main purpose to establish RSMP is to ensure maritime security at sea for the protection of domestic and international trade. Thus, contribution at large is the manifest projection of Pakistan as a state shouldering regional and international maritime commitments.

In order to strengthen interoperability and global efforts of maritime forces, Pakistan Navy started off the multinational naval exercise ‘AMAN’ in the North Arabian Sea in 2007. This was marked as a blue diplomacy move by the Pakistan Navy bringing together Maritime Nations in the IOR and calling for galvanizing efforts to maintain strong correlations at sea. The exercise has been aptly named “AMAN”, which is the Urdu term for “PEACE”. It signifies Pakistan’s endeavor for peace while remaining fully prepared to ensure peace in the region. Pakistan Navy to date had conducted seven AMAN exercises. The next year’s exercise is the 8th in number, which has been held biennially since 2007. All previous naval exercises of the AMAN series have been highly successful and not only were participated wholeheartedly by navies of friendly countries, ushering goodwill to Pakistan but have also resulted in all participants including the host Pakistan Navy, gaining tremendous professional experience.

The main objective of the AMAN series of multinational exercises is to promote regional cooperation and stability, greater interoperability, and to display a united resolve against terrorism and crimes in the maritime domain including piracy. Whereas in the sea phase, the participating navies attend the military drills with their surface and air assets, special operation forces, and maritime teams. They are involved in various activities, including maneuvers, weapon firing drills, maritime interdiction operations, flying operations, search and rescue exercises, and international fleet review– all of this improves the Pakistan Navy’s capability to combat nontraditional threats and improve the country’s soft image in the international community.

Moreover, this time alongside AMAN-23, an important maritime conference is going to be held for the first time at the Karachi expo center. Pakistan International Maritime Expo and Conference (PIMEC) is an initiative of the Pakistan Navy that is being organized under the patronage of the Ministry of Maritime Affairs in order to jump-start the development of the maritime sector in Pakistan and spur the Blue Economy. PIMEC is scheduled from 10 to 12 Feb 2023 and the exhibition will bring together stakeholders and companies from diverse maritime fields to exploit and explore the potential of the Blue Economy. It is actually to venture new chapter where we explore the true potential of much more that is to follow. Not only it will give us livelihood and vibrancy to our economy but also provide endeavors to mitigate climate change effects.

Written by Aliya Naseer: Lecturer at Peace and Conflict Studies Department, at the National University of Modern Languages, Islamabad, Pakistan.