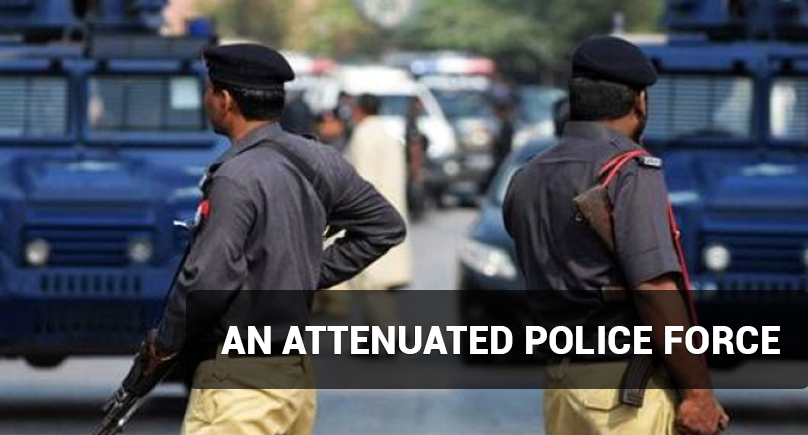 The Sindh police stands undermined and humiliated. And rightly so.

Although dozens of Sindh police personnel who feel humiliated due to the treatment meted out to their IG have deferred their leave for at least 10 days, the matter is far from over.

However, since the deferment is not open-ended, it indicates the police leadership’s expectation that the investigation into the incident ordered by COAS Gen Qamar Javed Bajwa, which they have welcomed unreservedly, will be completed within such time.

That the Sindh police is angry does make much sense. Earlier, maybe given the ‘sensitivities’ involved, there was not much lucidity from officials as to what had actually occurred in the hours before retired Capt Mohammed Safdar’s detention in Karachi.

Nevertheless, PPP chairman Bilawal Bhutto-Zardari’s news conference later in the day made it quite clear that the Rangers had laid siege to the house of the Sindh IG had at 2am, and he was later taken to a sector commander’s office and made to sign orders okaying Mr Safdar’s apprehension. The intention was clearly to wedge a divide within the PDM opposition alliance. In other words, a federal paramilitary force was used illegitimately, for political ends, to abduct the head of the province’s major law-enforcement agency.

The action strengthens many politicians’ claim, most lately made by Nawaz Sharif, that there is ‘a state within the state’ of Pakistan. Certainly, the Sindh Rangers, which technically report to the interior ministry, often function as if the laws of the land do not apply to them. They have in countless cases violated the right to due process by disappearing people, many of whom have suffered torture in custody. It is that sense of exemption — both on the part of those giving the order to force the IG’s submission, and those who executed it — which created a situation precipitating a looming institutional clash.

It was good that PPP’s chairman Bilawal Bhutto and chief minister Murad Ali Shah expressed their support for the Sindh police by visiting the IG at his residence. For a major civil law-enforcement agency to be weakened, that too in such a shameless manner, is totally unacceptable and deserves to be utterly denounced. The investigation promised by Gen Bajwa must be full, transparent, and lead to those responsible for the debacle being shown the door. This is a very serious matter to be swept under the carpet. Lastly, it is worth considering that political meddling in the workings of the police is also a sign of disregard towards these law-enforcement personnel. Unfortunately, such interference is on the increase across the country, and it must stop.