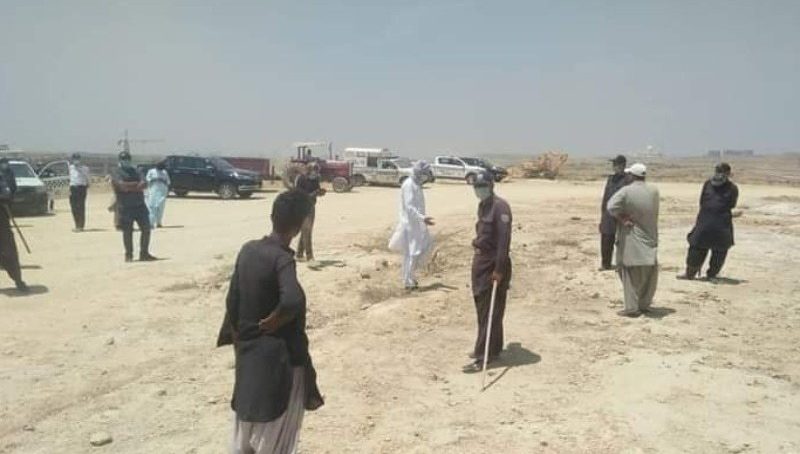 A recent video that went viral on social media a few days ago shows alleged guards and officials of Bahria Town subjecting the people of Malir to torture. News and videos regarding Bahria Town have been doing rounds on social media even before the patronage of Bahria Town by the Sindh officials began to be questioned. To find out what is happening there at the moment, the Rava News team turned to Goth Hadi Bakhsh Gabol Kathor.

What is the background of Bahria Town?

These are the days when the city of Karachi was in the grip of terror. The city, shrouded in darkness and fear, was waiting for a savior when, suddenly in November 2013, Bahria Town announced good news for the people of Karachi: That Bahria Town is bringing a modern city where foolproof security arrangements will be made, and everything will be provided to the citizens very easily including employment opportunities. At that time the price of the form was fixed at Rs. 15,000. It should be noted that this amount was non-refundable. The area of ​​plots in the new city announced by Bahria Town ranged from 125 yards to 1,000 yards. However, the value of the file of these plots, construction houses and flats reached thousands to millions of rupees overnight.

What is Bahria Town Plan?

Bahria Town project is under construction on Karachi-Hyderabad Super Highway. The project started from Malir district of Karachi and has now entered the Jamshoro district. If Bahria Town is measured by Google Map, it is spread over 30,000 acres. According to Bahria Town, they bought 5,000 acres of land from the general public, while the Malir Development Authority provided them with 9,385 acres. But it is noteworthy that all the lands purchased by Bahria Town from the common people were not in the area used by Bahria Town but in Balochistan and Thatta District and other areas. The Navy exchanged these lands with the Malir Development Authority.

According to BBC Urdu, the Supreme Court had ruled in 2019 in the ongoing case against Bahria Town for taking government land at a cheaper price that Malik Riaz, the owner of Bahria Town, should pay a fine of Rs 60 billion to the Sindh government. Bahria Town had assured the court that the amount would be paid in installments.

Is Bahria Town not for us?

Now let’s take a look at Malir district which covers an area of ​​2557 sq km. This area includes hilly area, plains, streams and agricultural lands. There are several hundred villages in this district but they have not been regularized. Despite this, the people here have been living here since before the establishment of Pakistan.

Residents of Deha Lingji, Konkar, Kathor and Bolhari allege that they were forcibly evicted from their land while their leased land was given to Bahria Town.

Bahria Town is giving neither plots nor money to the victims

Not only is there a series of land grabs in Bahria Town at the moment, but there has also been a scam of not allotting plots despite taking money from Bahria Town; the victims have been investing for the last ten years, but plots still have not been allotted to them.

Earlier, in November 2019, according to a notice issued by Bahria Town, the management of Bahria Town Karachi had directed the owners and file holders of plots in Bahria Paradise and Bahria Sports City’s ‘unoccupied’ areas.

The project management had said in its announcement on November 19, 2019 that the refund facility is available only for ‘blocked’ or ‘canceled files’. At the time, Bahria Town Country Head Shahid Mehmood Qureshi, Country Head of Bahria Town Sports City and Bahria Paradise, announced to provide relief in terms of 100% refund facility to the victims.

He had also said that Bahria Town would fulfill its promises and give plots to those who would opt for the said supply instead of refunding the money. “Those who apply for a refund against these payments, which they have given to the developer, will be given a 100% refund. And Bahria Town will also offer refunds to the affected people.”

But all promises are still up in the air and the victims are currently in dire straits.

Haleem Adil Sheikh of PTI and Nusrat Sahar Abbasi of GDA in the Sindh Assembly demanded presentation of a resolution and debate on the issue of occupation of Qadimi Goth by Bahria Town.

According to media reports, speaking in the Sindh Assembly, opposition leader PTI leader Haleem Adil Sheikh said that Murad Gabol, son of Faiz Mohammad Gabol, landlord of Gadap, had reached the assembly and complained to the members that Noor Mohammad Gabol and others were involved in Gadap. He pleaded that Bahria Town administration wants to demolish other goths and people are resisting, and suggested a debate in the assembly be initiated.

Later, Nusrat Sahar Abbasi also wanted to speak on the issue, but the speaker did not allow her to speak either.

What is the Indigenous Rights Alliance?

Locals formed their own organization against the Bahria Town administration under the name of Karachi Indigenous Rights Alliance, which has been protesting against the project for the past four years.

To find out about this issue, Team Rava turned to Hadi Bakhsh Gabol Goth Kathor on Sunday, May 23, where the All-Parties Conference (APC) of the Indigenous Rights Alliance was held in which more than 50 Sindhi, Baloch nationalist parties participated. Leaders, human rights activists and locals were present to raise their voices against Bahria Town to protect their land.

It may be recalled that in the first week of May 2021 in the same village, according to the claim of the locals, Hadi Bakhsh Gabol village was also attacked by the Bahria Town authorities to evict them from their homes.

Murad Gabol, who had won a lawsuit against Bahria Town three years ago over ownership of his four acres of land, said that the land was illegally occupied by the residents of Bahria Town. “We will not be silent, we will give our lives, not the land.”

He also denied the alleged meeting between the Bahria Town administration and Bilawal House.

Another local resident told Rava News that the Bahria Town administration in the village attacked us with the help of armed men. “He urged the political parties to please save our Sindh. Please protect our homes,” he said.

National Democratic Party Dr. Abdul Hai Baloch, while talking to Rava News in an emotional manner, said that it was by throwing the locals out of their ancestral homes. “What kind of development do we talk about?” he lamented.

Nationalist political parties and activists in an interview with Rava News have alleged that in Sindh, the Pakistan Peoples Party, which is also the ruling party in Sindh, while influential circles also encourage Malik Riaz. Otherwise, it did not dare to occupy our land.

Speaking to Rava, Nawaz Khan Zor, chairman of Jeay Sindh Qaumi Party, said that the Land Acquisition Act, 1894 was based on complete injustice and helped the dictatorial rulers to take over the land of the local people. “We should discuss this black law “Land Acquisition Act” and demand its repeal,” he said.

Actor Malik Baloch could not join the National Party, APC, but sent a message that Sindh and Balochistan should join a platform on which both should collectively fight against illegal activities.

Dr. Qadir Magsi, Sindh Progressive Party said that you decide whether you fight or remain a slave. Sindh is badly affected; we will not allow them to insult our family and women while Asif Zardari is a friend of Malik Riaz so there is no one to stop him in Sindh, he said.

The All Parties Conference also decided to hold a massive protest at the gate of Bahria Town on June 6, which may make this sensitive issue more sensitive.

However, the silence of the Sindh government in this regard is an indication that it is covertly supporting the Bahria Town administration in all matters.

Team Rava tried to know the position of Sindh government and Bahria Town administration in this regard which is still failing.

Why does the Pakistan Air Force need a new airbase in Balochistan?

A victory for Pakistan