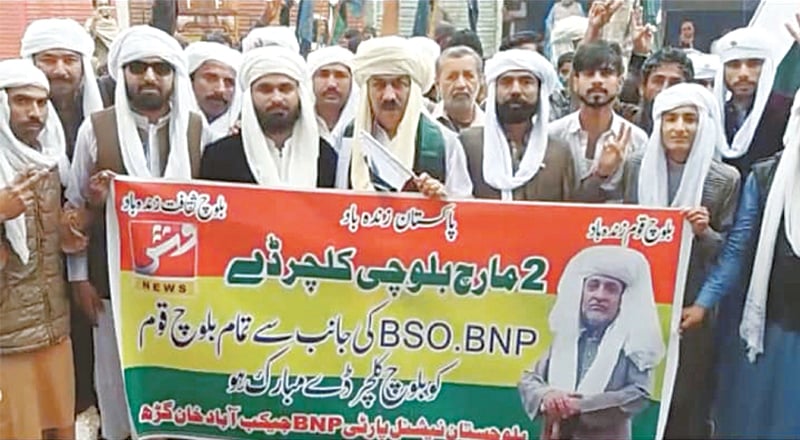 We would like to inform our readers about the culture of Balochistan. This is important because it will help appreciate the mood of the Baloch nation and will pave the way for the solution to the problem.

As the readers will know, Allah Almighty has created human beings in nations and tribes which have their own characteristics.

Culture refers to the customs and values ​​of a nation or society that are shared by all its members. Sociologists also agree that civilization is the main source of national identity or Culture in words comes from the language of a society, training, traditions, industry and art. Before knowing the culture of Balochistan, it is important to know about the tribes living there.

As mentioned in the previous episode, the Baloch call themselves one of the descendants of Amir Hamza, who was known in Arabia as a brave and courageous man, while his family was also distinguished from all other Arab tribes. Being of Arab descent, the Baloch have an element of bravery and courage, as well as Arab customs.

When this nation, which runs through the Aleppo Valley, arrived here via Sistan, over time it became divided into two branches due to its environment and regional situation. One of them is called Soleimani and the other Makrani. While the Brahuis living in this area are residents of Central Balochistan. Now 18 Baloch tribes including Bugti and Murree are Soleimani. Talpurs of Sindh also call themselves Soleimani Baloch.

Brahui-speaking Balochs include the Rahsani, Shahwani, Somolani, Bangalzai, Muhammad Shahi, Lahri, Bizenjo, Muhammad Hasani, Zarkzai or Zehri, Mengal and Lingo tribes. Although these tribes speak Brahui, most of them speak Balochi and Brahui at the same time.

The Baloch nation, like the Pushts, has its own judicial system called the jirga for its settlement and settlement of disputes. Sardar and Malik are also members of the district jirga.

From time immemorial, these jirgas have ruled on wills, divorces, betrothals, murders, fights, severe injuries and other cases of sedition and disorder in the tribe. Thus, every Baloch tribe was judicially independent.

After the advent of the British era, the British introduced their own law here and not only emphasized the widespread use of local jirgas to resolve their issues, but also organized jirgas for districts, tribes and provinces. The royal jirga was held in the districts for tribal disputes, in the summer in Quetta and in the winter in Sibi. In addition, there was an annual jirga in Fort Monroe to hear border cases between Punjab and Balochistan.

The jirga did not have a written constitution or law, but had its own traditions in this regard and traditional punishments were prescribed for all kinds of disputes. The members of the jirga used to give according to the circumstances. For example, in Makran, the bloodshed of a respected Baloch was three thousand rupees, that of an ordinary Baloch was a thousand rupees, that of a sailor five hundred rupees and that of an employee two hundred rupees. One-third had to be paid in cash, one-third in equipment and one-third in property.

Most issues were resolved according to Sharia law. But in some cases local customs were preferred. This system of justice remained in Balochistan even after the formation of Pakistan. It was abolished in 1970 by Chief Martial Law Administrator General Yahya Khan. Even after the abolition, however, about 90% of decisions in the Baloch tribes continued to be made under the same jirga system. But the order to abolish the system added to the ongoing tensions between the government and the Baloch.

Baloch thinker Sultan Muhammad Sabir writes with reference to the culture of Balochistan that Baloch culture is a culture which includes Brahui and Pashtun culture besides Arabic. Baloch and Pashtun culture naturally includes freedom, sensitivity and militancy. Explaining the reason, Sultan Muhammad Sabir wrote that since they live in the same area, the culture of the two nations is related.

Both Baloch and Pashtuns are happier with the birth of a son than with the birth of a daughter. In both the nations, men usually wear white clothes and women wear hijab. Another thing is that women who are subjected to social constraints work alongside men in the villages. This is also a reflection of the culture.

On the other hand, Brahui culture is a form of Balochi culture, there is no difference in the culture of the areas in Balochistan where Baloch Brahuis live. Commenting on culture, Baloch researcher Noor Mohammad Brahui said: “It should be kept in mind that the same elements and components of these civilizations will be considered as part of the civilization or culture which is absorbed with the common “national spirit” in such a way that every party, tribe or tribes consider them as their heritage or cultural asset. At present, the Brahui and Baloch tribes have become so united by adopting a few cultural principles in such a way that each of them has apparently lost its separate existence. Or the national spirit “has created a common cultural purpose by showing its influence, but the orthodoxy of the Brahui language in terms of language and literature is a subject of separate and in-depth study.”

Apart from dress, lifestyle, livelihood and economy, there are some proud rituals in the Baloch Brahui common culture which could not be eradicated even in this developing age. These nations are proud of these rituals including language, dance and music, sports and there is uniformity in beliefs, etc.

The tradition of “Hal Ahwal” still plays the role of newspaper, radio, print media and electronic media for the Baloch nation in remote areas. Even if two strangers meet somewhere during the journey, they do not apologize at all for taking the present and giving the present after Alik Salik. In this way, the whole area becomes aware of a minor incident and the hospitality is in the lap of the Baloch. No matter how old and poor the Baloch may be, he is humble for the sake of the guest beyond his means. It is the glory of Baloch hospitality that if a man is not present at home, it is the responsibility of the housewife to arrange the food and lodging of the guest.

The status and respect of women is part of the nature of Baloch. If any quarrel between the two sides reaches the point of bloodshed, then a woman’s interference for reconciliation turns bloody wars into peace.

Traditional Baloch heroes include Mir Chakar Rind, also known as Chakar Azam. Mir Chakar Rind is not just a name or a personality but also the culture, history and society of Balochs, economy and society, morals and customs, bravery and chivalry, enthusiasm and passion, speech and character, self-sacrifice, commitment and revenge name is. Sardar Mir Chakar Rind himself was brave and valued not only his brave friends but also his enemies. According to Mir Chakar, “I love the revenge of the brave who dare to attack my high forts.”

Mir Chakar Khan Makran had become popular in the nation in his youth during his rise to power. After the death of Mir Shahak, his son Mir Chakar ruled the entire Rind area and this was the golden age of Rind history.

According to Mir Chakar, “a man’s word is tied to his head” and Mirchakar was in tune with his word. The war that turned into a 30-year bloodbath and the same war bathed many famous Rind and Lasharis in blood and dust.