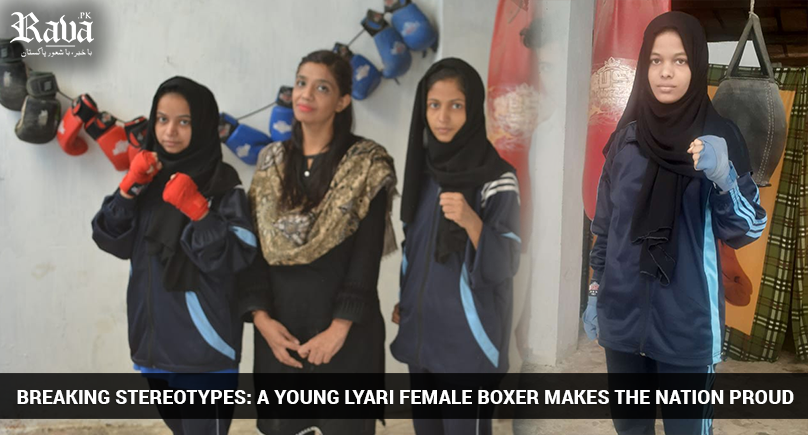 Lyari is an unfortunate neighborhood of Karachi which typically conjures up a picture of backwardness, violence, illiteracy and poverty. The undignified image of the forsaken area has been further besmirched by the infamous criminals of all shades: drug addicts, hardcore terrorists, and street criminals. In fact, Lyari had long held the notoriety of being a no-go area, until the Rangers and other law enforcement agencies played a decisive role in changing the nomenclature of a once-fearful hotspot of terrorism and crime.

An area that once symbolized fear and violence is now brimming with stories that can make a nation proud. An area that once harbored gang-war criminals now proudly claims to have gifted sportspersons and talented people striving to brighten up their country’s name. Undeterred by Lyari’s inglorious past, the youth—both male and female—are committed to changing the neighborhood’s destiny by dint of their hard work, academic pursuits, and unique sporting activities. One such tale of a father, who, defying all odds, has prepared his all four daughters for a sport like boxing comes across as a whiff of fresh air in an atmosphere or hatred, bigotry, and gloom.

The team of RAVA had the privilege to meet the four brave and ambitious girls, who, with the strong backing of their father, are pushing the envelope in a society mired in archaic traditions and gender discrimination.

22-year-old Nimra, in an age of wearing bangles and mehndi, has decided to put on boxing gloves with the resolve of making a name for herself in one of the toughest sports of the world.

Speaking to RAVA, Nimra said that she is very passionate about the sport and she learned it from her father, who is also her role model and a source of inspiration. She added that when her relatives heard about her passion in boxing, they reproached her father for pushing her to learn it. “In a society where people feel frightened to educate their daughters, you are making your daughters into boxers?, she quoted her family chiding his father over this step.

“But my father remained undeterred in the face of the family’s scathing criticism, and continued to train me,” she said. She went on to say that had it not been for her father’s resolve and persistence and her untiring effort to learn, she wouldn’t be able to achieve the 8th spot in boxing in the entire country.

Nimra said that she wants to play at the international level, but her financial situation doesn’t allow her to do that. “If the government supports me, then I can go places in boxing,” she asserted. She also appealed to Prime Minister Imran Khan, who himself has been a sporting legend, to support her so that she could make the country proud in the arena of sports.
In a special message to the youth, especially girls, she said that they should not get demoralized by today’s prevailing circumstances, and should instead feel motivated to do something they are truly passionate about.

RAVA also spoke to Nimra’s other three sisters, who are also involved in the challenging sport of boxing and are also willing to promote their passion along with their pursuit of education.

Finally, RAVA had a privilege to talk to the gritty girls’ father Mr Naseeb Jamal and asked about his experience about the tricky journey. The father responded by saying that his girls severely lacked confidence and were shy, but were fond of studies. He said that they would constantly ask him to go to college, but he would disregard their entreaties thinking how the diffident girls would face the cruel and strict society. However, relegating all these negative thoughts to the back-burner, the courageous father decided to swim against the tide and teach boxing to his daughters. “Today, I am proud to say that my daughters are no less than others, and I have enabled them to move freely in this society,” he said.

A society that regards a daughter as a burden, and is murdered in the name of honor, is also proud to have adoring fathers like Naseeb Jamal and Nisar Ahmed who are striving on their own to give their daughters a bright and scintillating future. If the government lends a helping hand to such talented youth and draws its attention to the field of sport, then the country has no dearth of the stars that can take give the country a unique identity and take it to the pinnacle of success. It behoves the government to pay as much importance to sports as it does to any other field of professional endeavor.