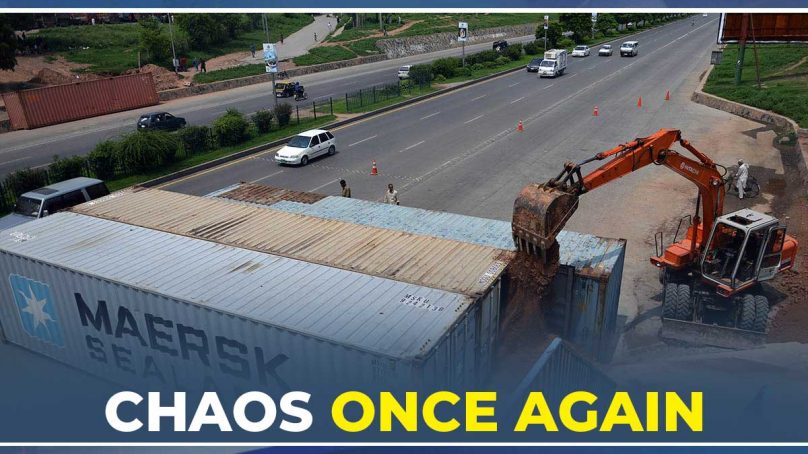 HERE we go again. Bedlam, chaos, panic reign supreme in the country—and the government’s strong-arm tactics have made the situation even worse.

The government’s unwise move to use the state apparatus to threaten PTI leaders and their followers ahead of their march to the capital has only exacerbated political tensions at a time of an extremely volatile situation. It’s not clear why the government has resorted to violence and fear tactics to stop the resurgent PTI’s democratic right to a march.

After initially indicating that it would let the march to proceed, the government’s position toughened dramatically during a Monday meeting attended by the prime minister and his elder brother from London. According to reports, the PML-N determined that an early election would not be ‘dictated’ by Imran Khan, and Interior Minister Rana Sanaullah was given a free hand to ‘handle’ with PTI marchers.

In the late hours of Monday, the minister directed police parties to ‘raid’ key PTI leaders’ homes and make arrests. The police action was documented and shared on social media, eliciting significant outrage and condemnation.

As the day progressed, both the government and the PTI appeared hesitant to back down and reconsider their positions. Flanked by the government’s allies in a press conference, Mr Sanaullah offered a concise defence of the government’s harsh measures, emphasizing that the PTI no longer has authority to march to Islamabad. The interior minister’s denial of the PTI’s right to protest was based on conflicts between protestors and police during the 2014 dharna, as well as certain PTI officials’ raucous ‘warnings’ that this time would be a ‘bloody’ march.

At the same time, Mr Khan was cheering on the judges and establishment to step in and ensure an early election before the situation went any further while speaking at his own press conference. He was also adamant on visiting Islamabad today. He urged his supporters not to be intimidated by the government’s actions, and questioned how many people the police could possibly arrest.

This is precisely the scenario many experts said the country would face as the power struggle between the government and the PTI became increasingly acrimonious. Both sides are equally culpable for this inexorable hostility.

This government’s credibility has significantly eroded on account of its incapacity to cope with huge challenges, drawing public censure and giving more stimulus to the PTI. Meanwhile, the PTI chief’s constant attacks on both the state and the government have wreaked havoc on the system. He is unwilling to budge, regardless of the cost to the country.

With the country’s political leadership at daggers drawn, the situation is swiftly opening for non-democratic forces to interfere. And if happens, the country would be in for another massive disaster.