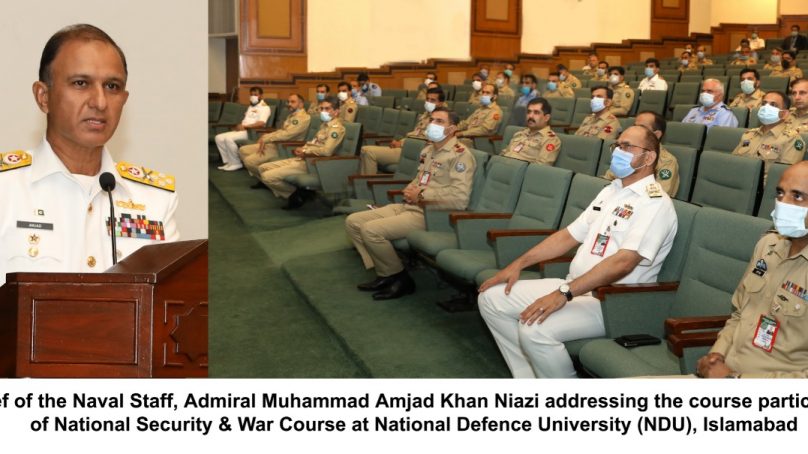 Chief of the Naval Staff Admiral Muhammad Amjad Khan Niazi visited National Defence University (NDU), Islamabad and addressed the course participants of National Security & War Course. On his arrival, the Naval Chief was received by Lt Gen Muhammad Saeed, President National Defence University.
While addressing the course participants, Admiral Muhammad Amjad Khan Niazi emphasized that we must keep abreast with the emerging technology and should make endeavor to deal with the complex and dynamic security environment of the world. The Admiral reiterated that jointness remains central to the modern concept of military operations as no military force can achieve success in today’s warfare single handedly. While focusing on the threat milieu the Admiral dwelled on the various initiatives and developmental plans of Pakistan Navy in line with his vision of projecting Pakistan Navy as a formidable regional maritime power with global outlook. The Naval Chief emphasised that Pakistan Navy has always been at the forefront in ensuring safety and security of international waters through collaborative maritime security and independent initiative of Regional Maritime Security Patrols. He further highlighted on the need to harness the potential of Pakistan’s immense maritime resources to provide the much needed stimulus to national economy, to which Pakistan Navy is effectively supporting the Government.
Naval Chief also emphasized that Pakistan Navy with the active support of sister services is ready to tackle the maritime security challenges faced by the country. Chief of the Naval Staff paid rich tributes to the role and sacrifices of the Pakistan Armed Forces for the defence and security of the country.
The Admiral appreciated the efforts of National Defence University for providing the academic stimulus and honing the professional abilities of course participants. National Defence University is the apex military training institute of Pakistan inculcating advanced professional military training to officers of Pakistan Armed Forces and friendly countries for assuming future key Command and Staff appointments.