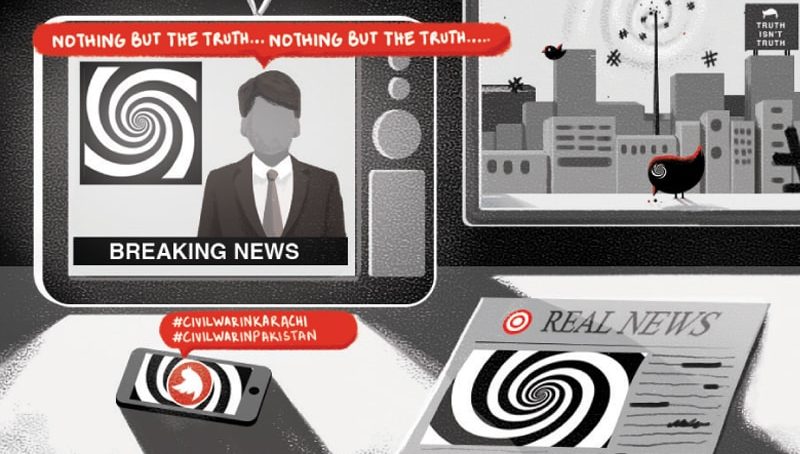 Following reports of clashes between the banned Tehreek-e-Labbaik Pakistan and Lahore police in Lahore on Sunday, April 18, the social networking site Twitter suddenly started tweeting various fake images and misleading videos with different accounts with #CivilWarinPakistan. And as you can see, #CivilWarinPakistan Twitter has become a top trend in Pakistan.

According to this trend, civil war has started in Pakistan while armed forces personnel are resigning. Worse, there is no law and order on the roads across the country.

The trend was aimed at escalating tensions and increasing unrest and inciting people to violence. Such a large and coordinated propaganda campaign was part of the ongoing Fifth Generation War against Pakistan. Which is often talked about now and the DG ISPR has also been issuing warnings about this new warfare.

But it remains to be seen whether we have taken any steps to deal with the fake news circulating on social media.

A six-month-old funeral procession was videotaped in this trend.

Not only this, but also an anonymous video of another Pak Army soldier trending which later proved to be fake.

While another old video of Punjab police personnel was attributed to Lahore tension and tweeted in this trend.

The #CivilWarInPakistan trend was launched through an Indian account @Gif_baaz at 2:02 a.m. Pakistan time, while Twitter accounts were operating from the Indian states of Pune, New Delhi and Mumbai.

Analyzing the trend, Arshad Sharif, a well-known Pakistani journalist and senior anchorperson, revealed that Indian elements were present in the WhatsApp groups of the protesting party workers and were inciting law enforcement agencies to resort to violence.

Let’s take a look at what this fifth-generation warfare is all about.

The term Fifth Generation Warfare was first used in 2005. It can be understood in simple language that in this war, the enemy makes full use of internal contradictions and spreads chaos. Then take full advantage of it.

This war is not fought face to face but with minds. Its weapons are proxies, TV, radio, print and social media, which are used against the citizens of the target country against their state and country. The dangerous aspect of this war is that it creates mental disorder and insecurity among the citizens. So it can be said that it is a psychological war in which the enemy attacks using all possible means of its power but Limits its use of military force. In this war, the enemy seeks to achieve its nefarious aims by using commercial, cultural, ideological, diplomatic media and propaganda, and Pakistan is undoubtedly facing the Fifth Generation Warfare, as evidenced by the #CivilWarInPakistan trend emerging on Pakistan’s Twitter handle.

There is no denying the fact that the Fifth Generation Warfare has been involved in India’s nefarious attempts to destabilize Pakistan by exploiting the political and religious fault lines by using mass media, including broadcast channels, print media and social media. This warfare is often called a major challenge by Pakistan’s security forces.

DG ISPR Babar Iftikhar also pointed out the threat of Fifth Generation Warfare and said that Pakistan has brought to light the evidence of India’s involvement in terrorism which has been taken very seriously by the world. Addressing a function on the occasion of Pakistan, the Army Chief said that a new challenge has been imposed on us in the form of Fifth Generation or Hybrid War, the aim of which is to spread chaos by defaming the country and the Armed Forces of Pakistan.

The recent trend has again drawn attention to the fact that fake news and propaganda campaigns related to Pakistan need to be taken seriously and all possible steps need to be taken for this.

On the other hand, in situations like Lahore, in which real-time tweets, hashtags and WhatsApp messages were used, the government’s ability to act quickly and in time to identify criminals, whether local or foreigner and through social networks, there’s a dire need to stop such propaganda

It is very clear that this war cannot be fought by a single state or army. It also needs the support of the people. This internal and external challenge facing Pakistan must now be taken very seriously.

Fifth Generation Warfare is a big challenge in preventing fake news against Pakistan for which it is time to take some drastic steps.

On the other hand, Pakistani users are also requested not to trust or share any content without verification.

Fifth Generation Warfare is a great threat to the security of Pakistan and to defeat the enemy in this war requires patience and serious measures.

Talks between the government and the banned Tehreek-e-Labbaik: What exactly happened?