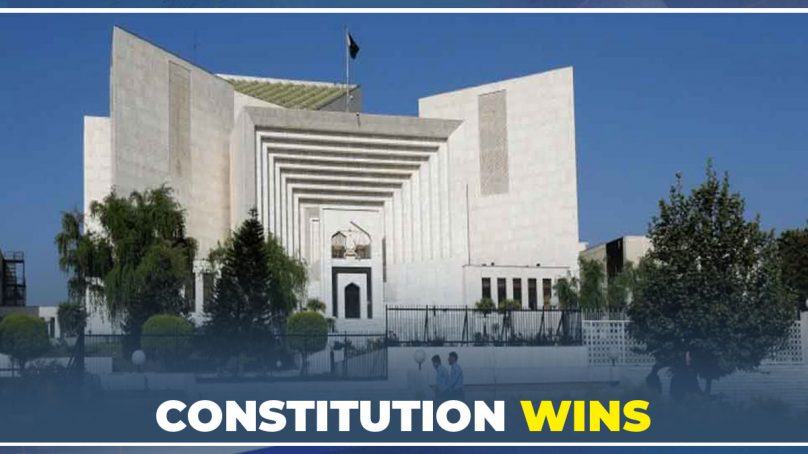 This is the most that could have been expected from the highest court of the country. The Supreme Court has declared in unison that the government’s attempt to sabotage the April 3 no-confidence vote was ‘unconstitutional,’ and that all of its subsequent decisions stand null and void.

In the historic verdict, the Supreme Court has thwarted an odious assault on the country’s democratic order and reasserted its role as custodian of Pakistan’s Constitution. It is hoped that the decision, which came just as the country seemed to be on the verge of catastrophe, will be able to draw the country back from the brink.

The ruling has come at a time when the entire democracy has become a farce due to Prime Minister Imran Khan’s strident refusal to allow his opponents the satisfaction of voting him out. Mr Khan had political options: he could have gracefully succumbed to political reality and focused his energies into the next elections in a variety of ways. Yet, in his obstinacy, the prime minister demonstrated to the people that if he wanted his way, he would enthusiastically plunge the country into a constitutional maelstrom.

The PTI’s impulsive decision to have a simple parliamentary procedure reversed on the pretext of Article 5 will go down in history as a disgraceful footnote. Indeed, in light of the Supreme Court’s unfavorable ruling, the PTI must reflect on whether it was loyal enough to the Constitution when it unashamedly ignored it in pursuit of a limited political purpose.

The economic consequences of the subsequent instability have been calamitous. In the midst of the uncertainty, the dollar-rupee exchange rate has tumbled, raising severe concerns about the country’s present foreign exchange reserves. Our foreign ties have also taken a hit as a result of the prime minister’s insistence on making a big deal out of a ‘foreign plot,’ the facts of which he has yet to divulge.

What is admirable is that in this historic ruling, the Supreme Court has set a remarkable precedent, relegating the ‘doctrine of necessity’ in the dustbin of history. In the aftermath of its recent thrashing in court, the PTI would be judicious to now go by the book and avoid doing anything that’s at odds with the Constitution of the land.