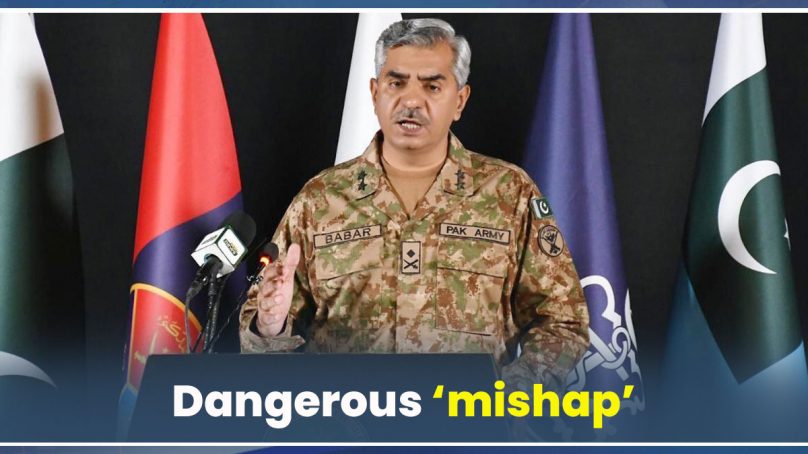 The Indian missile that crashed near Mian Channu on Wednesday may have had catastrophic repercussions. Thankfully, the Pakistani military reacted calmly to the event and avoided retaliation.

India has conceded that it was an accident but did not explain how such a dangerous ‘mishap’ could have happened. Also, it has failed to tender a clear and explicit apology to Pakistan.

Pakistan’s response has been emphatic, and it seeks explanations to determine how this provocation occurred and what India intends to do to prevent it from recurring. Nonetheless, Pakistan should examine its own defense system for any gaps that may need to be filled in case a similar event occurs again.

However, it’s significant to place this incident in the context of tense relations between two nuclear powers. It’s a miracle that the event didn’t result in a tragedy. The missile may have hit a commercial plane whizzing through Pakistani territory at such a high altitude, resulting in unthinkable consequences. It may have collided with a populous location, causing death and property damage. It may also have sparked a military response, ending in a conflagration due to miscommunication and misunderstanding.

The event has exposed India’s technology and grave faults in its safety systems. This isn’t only a Pakistani issue; the international world should demand greater transparency from India as well. The fact that a nuclear-armed country’s technology and command and control systems are so inadequate is cause for substantial concern around the world. All nuclear states, in particular, have well-established safety measures for strategic weapons and security processes in place to ensure that no accidents happen.

Unfortunately, this missile incident reveals utter ineffectiveness of India’s systems that should be examined by renowned international organizations to ensure that all defects and weaknesses have been addressed. Pakistan has a right to know this information since any ineptness on India’s part in handling its strategic weapons has a direct impact on Pakistan.

The incident serves as a warning to both India and Pakistan about the dangers of a nuclear-armed South Asia. It must be dealt with the gravity it deserves, rather than being dismissed as a trivial mishap whose investigation is kept hidden from public view. In this environment, both Pakistan and India, as nuclear rivals, should ensure that communication channels are kept open in order to avoid repeat incidents.