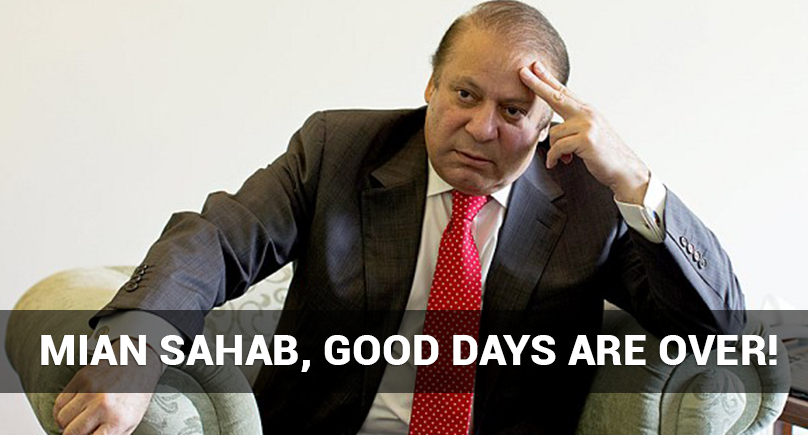 End of Roads: Mian sahab, good days are over!

IT is obviously impossible to venture speculative guesses about what the future holds for the Pakistan Muslim League Nawaz (PML-N) in the wake of its supremo Nawaz Sharif fresh diatribe against the Pakistan Army.

The  businessman turned politician founded the PML-N, and gained popularity in Punjab in the 1980s during the dictatorship of General Ziaul Haq.

His allegiance to Gen. Zia led to his being appointed the Punjab chief minister in the aftermath of the elections of 1985.

Following Zia’s death, Sharif contested the elections on the platform of the Islami Jamhoori Ittehad (IJI), and in 1990 he managed to become the Prime Minister of Pakistan. Nevertheless, in 1993 the President of Pakistan, Ghulam Ishaq Khan, sacked his government, leading Sharif to formally create the PML-N.

The PML-N won its first general election in 1997 by getting 137 National Assembly seats out of a total of 207 seats. Benazir Bhutto’s Pakistan Peoples Party (PPP), which lost the elections, only managed to win 18 seats. The clear victory bolstered Sharif, and he slowly started to disengage himself from the powerful military establishment. He eschewed his conventional politics and asserted his control on the foreign policy of Pakistan by upholding peaceable relations with India.
He also kickstarted numerous developmental projects, with the Lahore to Islamabad motorway being launched in his second tenure. Nevertheless, the Kargil debacle resulted in a crack between the PML-N government and the then military establishment.

Consequently, on October 12th 1999, Sharif was overthrown in a coup staged by the then chief of Army Staff general Pervez Musharraf. However, Sharif, on account of his close relations with the then American president Bill Clinton and the Saudi rulers, was able to go into exile in Saudi Arabia on a jointly agreed deal.

Sharif was not permitted to take part the 2008 elections, although the PML-N won 91 National Assembly seats and formed the government in Punjab. In 2013, the PML-N catapulted to power, and Sharif became the first politician in the country’s history to be elected Prime Minister for a third time. However, his clash with the establishment over the country’s foreign policy once again landed him in trouble.

Moreover, his move to follow a case of sedition against Musharraf annoyed certain powerful quarters, and then the Dawn leaks scandal only further deepened Sharif’s glitches.

Therefore, the Panama papers gave the much-needed advantage to the imperceptible forces and Sharif was debarred through the courts and was then condemned to jail by the accountability court. In the 2018 elections, the PML-N managed to only secure 82 seats in the National Assembly.

But the PML-N, in spite of facing the wrath of the establishment and presently being entangled in the ongoing accountability witch-hunt, still remains integral and is evaluating the political chessboard.
The narrative of civilian sovereignty and ‘respect the ballot’, which was advocated by the PML-N, has already been capitulated since the party not only voted in favor of the extension for the Army Chief but also because the party has remained hushed on numerous issues afflicting the country.

In spite of being the largest opposition party, the PML-N has not mobilized the common people or held any protests against the inflation and the worsening condition of the economy.

Maryam Nawaz, until August last year, did lead mammoth public meetings but they were only aimed at keeping the outdated the PML-N vote bank in Punjab emotional and undamaged. These speeches typically always centered on Sharif and ‘respecting the ballot’.

No one in this country comprehends the subtleties of power politics better than Sharif, which is why PML-N, in spite of yielding its political narrative, is still able to persuade its vote bank that it is the only party which is defending civilian supremacy.

But one has to appreciate that democracy is not only about coming to power, but it’s about shielding the basic civic rights of the public and also nurturing diversity in society. But the PML-N has never really been worried about that.

Sharif knows that Punjab still remains his stronghold since the shabby performance of the PTI at both the center and in Punjab has already given the former Prime Minister the edge.

As opposed to the PPP, the PML-N has never zeroed in on consolidating its organizational structure at the grassroots level and has constantly depended on electorate politics by exploiting Sharif’s political brand.

While Maryam has inserted some fresh blood into the party, the problem remains that there is still no real grassroots structure and most PML-N loyalists are continuing to practice an old-style, pro status quo style of politics.

But in the wake of his fresh invective against Pakistan’s establishment, Nawaz Sharif seems to have closed all doors to his return to Pakistan’s shaky but appealing political landscape.