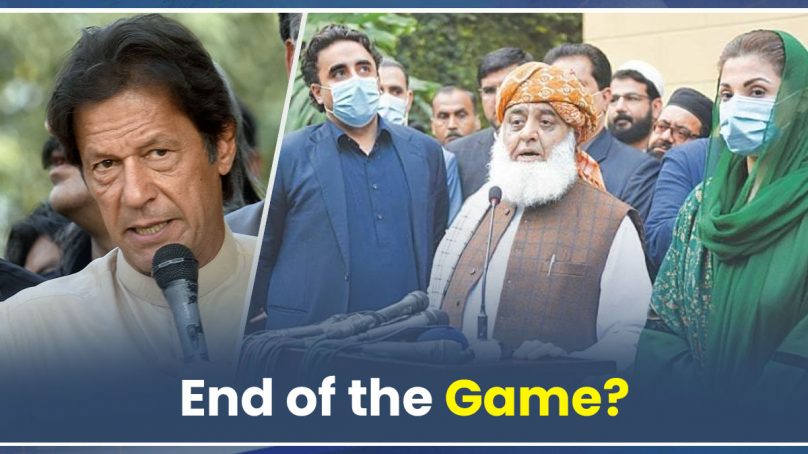 End of the Game?

After much dilly-dallying, the opposition on Thursday allowed the electronic media to meet with the dissenting PTI MNAs at Sindh House. This was an attempt to show that the legislators had not been bribed, as the government claimed, but had come of their own accord because they feared hostile action from the ruling party in the run-up to the National Assembly’s no-confidence vote against Prime Minister Imran Khan.

Some valid fears still exist, including a rising threat of violence, especially in the aftermath of the recent incident at the Parliament Lodges and the government’s veiled threat of physical intimidation. However, given our shady history of vote-buying and horse-trading, it’s difficult to rule out the idea that the opposition would provide some inducements to the dissidents, such as cash or a seat in the next election. It’s a trend that has only grown since the 1990s.

The media would not have been permitted into the premises to interview these parliamentarians if the opposition had something to conceal, or if they had been ‘abducted’ as the administration alleged. Though the precise number of PTI MNAs in Sindh House is unknown, it is believed to be upwards of 17 — one lawmaker claimed there were 24 — a massive amount that will aid the opposition’s efforts to send the PM packing.

Despite PTI ministers’ claims that the PM wants to fight the no-confidence vote, one thing is clear: the prime minister has lost the House’s confidence, with a huge number of PTI MNAs defecting to the opposition side.

While it’s comprehensible that Mr Khan is reluctant to accept loss at this time, he must reject calls for governor’s rule in Sindh or confrontational methods. His meeting with National Assembly Speaker Asad Qaiser shortly after the PTI dissidents appeared on TV screens was unwarranted, as it added to the speaker’s already high level of controversy following the submission of the notice of no-confidence motion.

In such a situation, crossing constitutional limits, using state apparatus, or resorting to violence to prevent lawmakers from voting can have grave consequences for our fragile democracy, particularly when some elements are already urging non-political forces to meddle for the country’s sake.