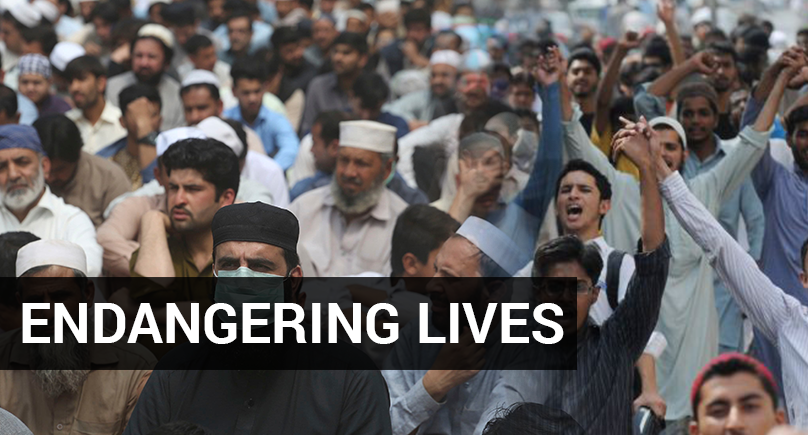 THE sharp rise in Covid-19 cases in the country can conveniently be attributed to the recklessness displayed by our political parties, including the opposition and the ruling PTI.

Over the last few weeks, rallies in major cities, a massive election campaign in Gilgit-Baltistan and a mass funeral for the TLP chief have shown the level of our political leaders’ collective apathy and insensitivity towards the wellbeing of the common public.

While the PML-N, PPP and JUI-F took the lead in calling followers to huge gatherings under the PDM alliance banner, the Jamaat-i-Islami also displayed a similar idiocy in Swat as thousands gathered for a public meeting called by the party. The PTI is also guilty of pre-pandemic style canvassing in GB as well as for holding vast conventions in Islamabad. The actions of these political leaders are absolutely careless show a blithe disregard for the severity of a virus that has ruined lives and livelihoods across the globe. The PDM would do well to postpone all its rallies until safer times arrive.

The sinking of the curve in August prompted both the provincial and federal authorities to adopt a lackadaisical approach to preventive practices and resume public activities with an enthusiasm that made one think that the threat was over. Unfortunately, that is far from the truth. In fact, the reality is dreary as coronavirus cases are increasing to dangerous levels, with a national positivity ratio moving past 7pc. In Azad Kashmir, KP and Sindh, this ratio is even higher at 11.45%, 9.85% and 9.63% respectively. Per the NCOC, the number of seriously ill patients admitted to hospitals with the virus has risen two-fold in the last 15 days, while the average daily death toll in the last seven days was logged at 35.

This apathetic attitude demonstrated by political leaders is deplorable and warrants a drastic change. Instead of taking measures to improve the lives of Pakistani citizens, these leaders are doing all they can to unnecessarily put them at risk. If the current growing tide of positive cases is not contained, hospitals, which are already overwhelmed, will find it impossible to treat infected patients. It’s time the political elite of this country woke up and smelled the coffee.