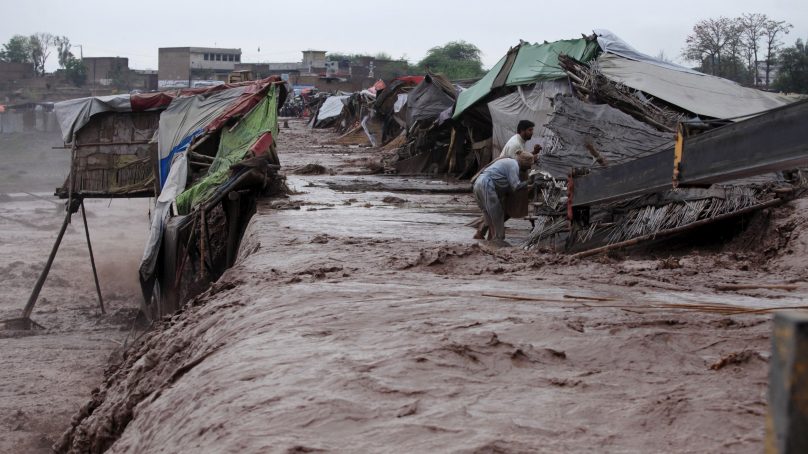 A wave of death and destruction is still sweeping across vast swathes of Pakistan. Floods brought on by torrential rain continue to unleash havoc, destroying livelihoods and washing away entire settlements, leaving death and gloom in their wake.

Since the environment has altered and caught us completely off guard, climate change is no longer just an abstract doomsayer’s prediction. This is in relation to the 385% higher rainfall in Sindh and the 371% higher rainfall in Balochistan so far this summer, according to the Pakistan Meteorological Department.

Back-to-back heatwaves in the two provinces preceded the remarkably heavy rainfall, which helped to set the stage for the catastrophe that subsequently occurred. There are grave concerns that Pakistan’s calamitous weather patterns will eventually become the “new normal.”

The number of people killed by this year’s rains appears to increase daily, with Balochistan to be the province most severely impacted.

Given the extent of the damage, it is disappointing that there does not appear to have been any effort to date to formally map the disaster-affected areas or detect the regions where risk is still rising. If such data has been compiled by any authority, it must be made public in order for the scope and severity of the disaster to be understood.

Additionally, it appears that disaster response is being carried out on an as-needed basis rather than in accordance with a plan to prevent loss of life and livelihood. This must change.

Administrators and provincial governments will have to spend a lot of money learning what their future development goals should be after this year’s monumental loss of life and property. Clearly, moving forward, any rehabilitation and building activity must have climate resilience as its defining characteristic. It is necessary to rebuild the infrastructure that has been damaged and the settlements that have been completely devastated, keeping in mind that what happened this year can and most likely will happen again.

What’s more, a significant amount of effort will need to be made to inform the populace at the local level on how they might adapt to the changing climate. A few important areas where the government may help by bringing specialists and citizens together are where to develop communities and plant crops, how to safeguard people and livestock, and how to withstand a natural disaster.

It’s time the policymakers sat together and devised a strategy to counter the adverse effects of climate change that brings death and devastation each year.