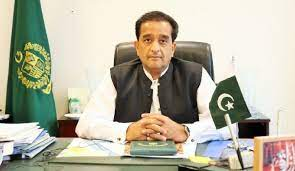 Islamabad 10 June 2021: ‘Water management is one of the biggest issues that Pakistan has been facing in recent decades. At the moment, our water storage capacity is close to 10 per cent, which is very low compared to the world, where the average is about 40 per cent. This was stated by Malik Amin Aslam, Special Assistant to the Prime Minister / Federal Minister for Climate Change, in a virtual dialogue about Recharge Pakistan, a 30-year programme focusing on building Pakistan’s resilience to climate change through ecosystem-based adaptations for integrated flood risk management. The event was joined by government officials and national and international experts from WWF.

Malik Amin Aslam also said that the Recharge Pakistan is one of the government’s priority programmes that encompass nature-based solutions. He added that glaciers melting in the north coincided with monsoons in the southern part of the country, coming together to create floods and super floods which damage infrastructure and cause devastating economic loss. He expressed his concerns that this water is not utilized properly nor is it adequately stored. He added that there are 14 wetlands on the left and right banks of the Indus and these sites, although being close to this mass of water, have been degraded due to pollution and other anthropogenic factors. He emphasized that there is a need to use this water to restore wetlands and allow it to recharge groundwater aquifers that are being depleted. ‘We have decided to put government finances behind this initiative and this year, we will be planning for at least a billion rupees to be spent to focus on two or three pilot sites’ he remarked.

The Ministry of Climate Change (MoCC), in collaboration with the Ministry of Water Resources (Federal Flood Commission) and WWF-Pakistan, will be implementing different initiatives related to floodwater management and climate change mitigation under this programme. The programme will address imminent and emerging environmental challenges the country faces such as super floods, droughts, widespread rains, among others, and will focus on building climate resilience for the most vulnerable communities living in the Indus Basin. The programme consists of three phases and each phase spans over a period of ten years. This long-term project envisions that by 2050, ecosystem-based adaptation contributes towards better climate resilience, water and food security, and sustainable livelihoods. More than 10 million people, which makes around five per cent of Pakistan’s population, will directly benefit from the project, while 20 million people across 50 vulnerable districts of Pakistan will be indirect beneficiaries.

Recharge Pakistan programme will be implemented in selected sites, spanning over a stretch of 1,300 km of the Indus River, across Khyber Pakhtunkhwa, Punjab, Balochistan and Sindh. These sites will be selected based on flood risks, climate projections, water storage, recharge potential, and the needs of the communities.

Speaking on the occasion, Hammad Naqi Khan, Director General, WWF-Pakistan said that in the last two decades, Pakistan has faced serious climatic events and incidents of widespread rains and super floods are increasing in intensity and frequency in the Indus Basin, resulting in serious humanitarian and economic repercussions. Overall, changes in the climatic conditions are impacting the populations of diverse animals and plants in the region, as well as livelihoods. He emphasized that to address the issues of floodwaters and climate change, integrated flood risk management is now a key national priority and added that this project proposes to undertake ecosystem-based adaptation measures that will store floodwater in wetlands, floodplains and depressions (green infrastructure) at several priority sites along the project area.

Recharge Pakistan contributes to the relevant policies and commitments, including the National Climate Change Policy, National Flood Protection Plan IV, National Water Policy, and Sustainable Development Goals (SDGs). It will lead to additional water reservoir capacity in the river systems to regulate water discharges during high floods and will promote local rainwater harvesting and development of small storages on run of the rivers during peak flows.

To present opportunities and solutions for the effective implementation of Pakistan’s nationally determined contributions (NDCs), WWF-Pakistan held another seminar in Islamabad. This was the closing session that included a panel discussion on public and private sector engagement in the implementation of NDCs, that was joined by different climate experts. The event aimed to strengthen climate change mitigation efforts by reducing greenhouse gas emissions, promoting climate finance and align our national policies with environmental sustainability in the long run. The outcomes from the series of provincial stakeholders’ consultative workshops, held previously, on Pakistan’s enhanced NDCs were presented during the session specifying the challenges and recommendations to improve Pakistan’s NDCs. WWF-Pakistan believes that NDC is a key tool for transition to a low-carbon future and mitigate the adverse impacts of climate change at a local and global level. Speakers emphasized that climatic challenges should be taken into consideration for the sustainable growth of the country.

Naheed Shah Durrani, Secretary, Ministry of Climate Change, Government of Pakistan was the chief guest at the event and remarked that the changing environment due to climate-induced factors requires countries to have robust, inclusive and ambitious plans to address these changes. She noted that ratifying the Paris Agreement under UNFCCC in 2016 was a vital step that Pakistan took to mobilize the resources the country needed to build a resilient economy. ‘In line with these efforts after five years, MoCC has instituted a whole-of-government approach to submit the country’s highest possible ambitions to UNFCCC while taking line ministries and agencies on-board for inclusivity’, she added.