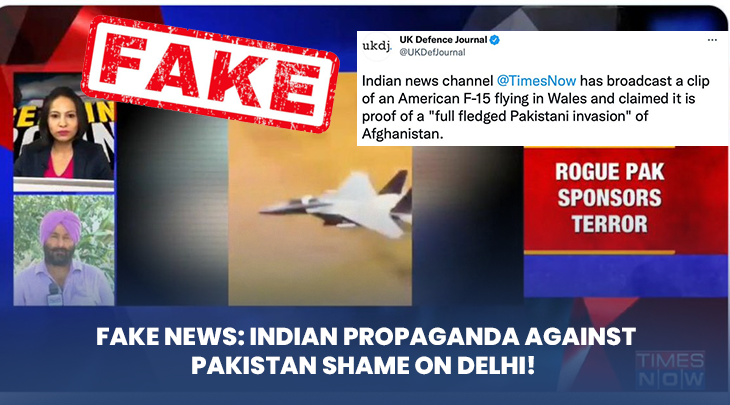 It is no secret that India has been waging a propaganda war against Pakistan for years, targeting Pakistan’s ideological base and national security agencies. A massive campaign was launched on social media, which also included former Afghan government officials. But unfortunately, some Pakistani political parties and some media persons also became part of the campaign and emerged as the Fifth-Generation war tool against Pakistan. Pakistan has presented to the world irrefutable evidence of the Fifth-Generation warfare against India.

In an interview with CNN, National Security Adviser Moeed Yosuf said that India was involved in negative propaganda against Pakistan. The video of the plane is being propagated in the Indian media as a Pakistan Air Force plane, while in fact there was a clip of an American plane in Britain.

He said that India’s fake news network has already been exposed in the international media. He reiterated that, until recently, the world did not believe us but now all the doors are open because what is happening in India is very cruel.

“Today, no one can say that Pakistan’s position on India is not vague or based on truth,” he said.

Yousuf said that India had recently spread propaganda about Pakistani aircraft in Afghanistan, which Delhi should be ashamed of.

Addressing the Military Awards Ceremony at GHQ Rawalpindi on the occasion of Pakistan Defence Day on September 6, 2020, Army Chief Qamar Javed Bajwa said: “I would like to draw your attention to another challenge and this challenge was imposed on us in the form of fifth generation or hybrid war. Its purpose is to discredit the country and the armed forces of Pakistan and spread chaos. We are well aware of this danger. We will surely succeed in winning this war with the cooperation of the nation, God willing.”

While pointing out the danger this year as well, he said that our enemies also want to achieve their nefarious aims through unconventional tactics including propaganda and misinformation. “We are aware of all the tactics and tricks of external enemies but some of the elements have to be dealt with severely. We all have a moment of concern that some people are being used by anti-national elements. It is called hybrid or fifth generation war. Its purpose is to hollow out the roots of Pakistan and the country. Integrity is at stake.”

It may be recalled that the EUD Info Lab, a research institute working on fake news in the European Union, had exposed India’s propaganda against Pakistan. It was revealed in the Indian Chronicles that more than 750 websites of the world were used for propaganda against Pakistan in 119 countries. The most worrying feature was that all these websites were being operated from India. And the main purpose of these fake websites was to tarnish Pakistan’s image in the world.

Federal Minister for Information Fawad Chaudhry revealed in a press conference that during the last two years, anti-Pakistan news and trends on social media were being operated from Afghanistan, India and Israel with the sole aim of promoting Pakistan in the world. Declaring a terrorist state was also a fact that the Indian intelligence agency is currently focusing all its attention on in the ongoing hybrid war against Pakistan so that they can prove Pakistan a failed and terrorist state in the eyes of the world.

Surprisingly, it has become the habit of Pakistani politicians to make such irresponsible statements about the institutions responsible for the country’s integrity when they are not in power.

It is estimated that there are about 114 channels operating in Pakistan, including 31 current affairs and 42 entertainment channels, 258 FM radios, of which 196 are commercial and the rest are non-commercial. Internet TV has about 12 licenses, including NewTel, PTCL and World Call. The number of mobile phone connections is about 180 million, while some users have more than one SIM, about 10. There are 120 million mobile users in the country.

The number of 3G and 4G users is 98 million, while there are about 65 million people on WhatsApp, 56 million on YouTube and 37 million on Facebook. These people have access to all kinds of information.

There is a need to ideologically strengthen our cyberspace to fight this narrative war, while there is an urgent need to educate the public.