Financial Scam in Hyderabad Motorway: Is the Sindh Govt Asleep at the Switch?
Recent View all
Press Release
Read more

Home  »  Editors Choice   »   Financial Scam in Hyderabad Motorway: Is the Sindh Govt Asleep at the Switch? 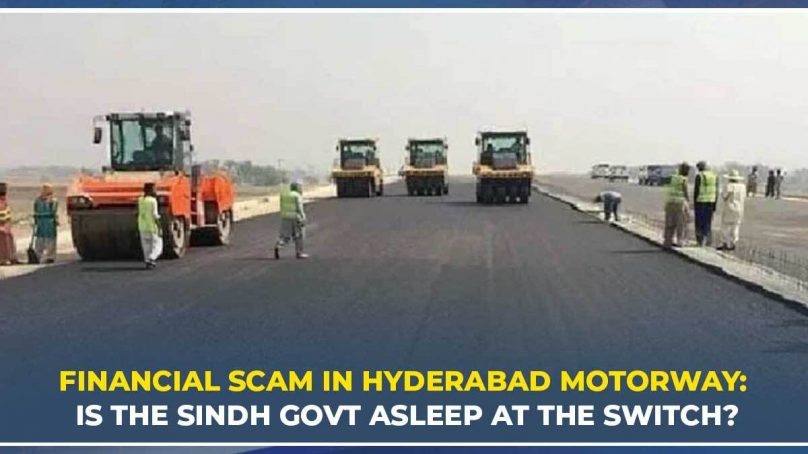 In the saga of corruption in the Hyderabad-Sukkur Motorway (M-6) project, new revelations are being made every day. Deputy Commissioner Matiari Adnan Rashid and Deputy Commissioner Saeedabad Assistant Commissioner Mansoor Abbasi, suspended in the Matiari mega scandal, misused the powers of the Land Acquisition Officer to siphon off nearly Rs. 2.5 billion from the amount allocated for the construction of the Sukkur-Hyderabad Motorway.

According to the Rava News investigation, one and a half years ago, the National Highway Authority (NHA) released money to four districts of Matiari, Naushahro Feroze, Khairpur and Shaheed Benazirabad in order to acquire land for the motorway.

However, the recent flood in Sindh left the province in dire straits, drawing the government’s attention to the victims hit by the catastrophic deluge.

Through 438 cheques, these two government officials are reported to have embezzled a whopping sum of Rs. 2 billion. More alarmingly, the amount of Rs 52 crore interest on the amount received by Matiari district for land acquisition has also been pocketed.

Rava News’ probe also divulges that the money given for land acquisition had to be paid to 73 settlers whose lands were coming in this highway. However, only 22 of the 73 settlers were paid the rest of the money with the collusion of these influential officers.

A joint investigation team — comprising Chairman Anti-Corruption and DIG Special Branch and DIG Hyderabad — has been constituted to investigate the matter.

Deputy Commissioner Matiari along with his three drivers, PSO and accountant have also been arrested, while a series of revelations on behalf of the main character of this scandal continues. According to anti-graft sources, the arrested Deputy Commissioner Matiari Khardbard is ready to return the money. However, the offenders demand they be given a clean chit and a safe exit.

Talking to Rava News about the colossal scandal, PTI Sindh leader Makhdoom Mohsin said that the Hyderabad-Sukkur Motorway project was supposed to be completed in 2017-18, but it still hasn’t been finished yet.

He further said that not even the chief secretary has the power to withdraw funds from the official account in excess of $1 million. “Anytime you withdraw more than Rs. 10 lakhs, the transaction will be completed by cross cheque; however, you cannot transfer this money to a personal account; it can only be transferred to an official account,” he explained.

However, in this fraud, 2 billion 14 crore rupees have been taken out in just 26 days. Videos show Deputy Commissioner Matiari filling his sacks with cash and transporting it to Sahiwal.

It’s equally important to probe how Assistant Commissioner Saeedabad Mansoor Abbasi managed to buy three hundred acres of land in Tando Allah Yar as it’s hard to appreciate how an officer with a reasonably modest income can buy such an expensive land.

However, the PTI leader said that Sindh Revenue Minister Makhdoom Mehboob Zaman is the main character in peculating this amount and should be investigated.

Mr Mohsin went on to suggest that Rs. 39 lacs have been declared in the official tax return of Mehboob Zaman. However, of late, he has reportedly bought a car, a watch and an apartment.

He further revealed that the arrested Deputy Commissioner Matiari has admitted that he has paid 50 crore rupees to the Revenue Minister of Sindh through his two front men Saif Shah and Musrat Malah.

Saif Shah has corruption charges on record, while Musrat Malah is involved in drug trade in Matiari district.

“We demand that these four people Saif Shah, Aslam Pirzada, Musrat Mallah and Mumtaz Shah be arrested and investigated,” he said.

“If it’s established that my family or I am involved in the misappropriation of the money allocated for Matiari in the Hyderabad Sukkur Motorway scandal, then I will not only leave the ministry but politics,” he asserted.

“Neither had I appointed DC Matiari nor do we have anything to do with the purchase and transaction of lands.”

Regarding the motorway project, he said that it is a national project which will bring prosperity to the region, adding that any likelihood of corruption in it was out of the question.

He further said in this regard that he has the right to take legal action on the allegations made against him, adding that he’d started consulting the legal team on this.

On the other hand, in the Sukkur-Hyderabad Motorway project, NAB has also asked for the details of all the seven districts coming along the way.

It is upsetting to note that a national project that will bring prosperity and development to the region is being exposed to stories of financial corruption with the connivance of government officials.

This multi-billion-rupee financial scam in the Sukkur-Hyderabad Motorway project is a test of the Sindh government’s credibility and reputation. While the government is duty-bound to retrieve the money from the unscrupulous government officials, it’s also responsible for conducting a complete and transparent probe into the matter in order to hold the culpable to account.