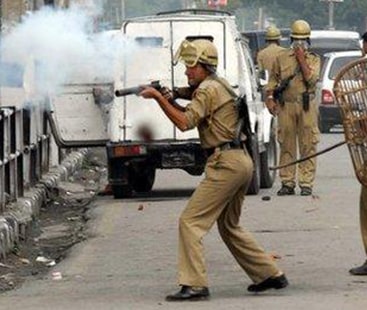 Genocide Watch – a U.S. based organization that exits to build an international movement to predict, prevent, stop, and punish genocide and other forms of mass murder – has issued an alert for Indian-occupied Kashmir in the wake of India’s ongoing atrocities, aggression and clampdown in the Muslim majority region.

“On August 5, 2019, the Indian President revoked the Special Autonomous Status of India Administered Jammu and Kashmir under under Articles 370 and 35A of the Constitution of India. India has over 600,000 troops in Kashmir. Movement of people and freedom of the press are restricted. India has cut off internet communications,” Genocide Watch stated in its alert.

Explaining the reasons behind issuing the alert, the organisation also recalled the Indian atrocities in Kashmir where occupation forces have already committed genocide and massacres, killing thousands of people with impunity.

The organisation has also given a list of risk factors for a genocide that are early warnings of massacres in occupied Kashmir:

1. Prior genocidal massacres and continuing impunity for such killings;
2. Continued armed conflict between India and Pakistan over border areas in Kashmir;
3. An exclusionary ideology of “Hindutva” – India as Hindu nation – by Modi’s ruling BJP;
4. Authoritarian military rule without legal restraints imposed by civilian Indian officials;
5. Rule by a minority military force (Hindus and Sikhs) over majority Muslim citizens;
6. Cut-off of communications and outside access by internet, media, and trade;
7. Widespread violations of basic human rights – torture, rape, 2-year detentions without charge, arbitrary arrests and deportations of Muslim political and human rights leaders.

Genocide Watch has urged the United Nations and its members to warn India not to commit genocide in Kashmir.