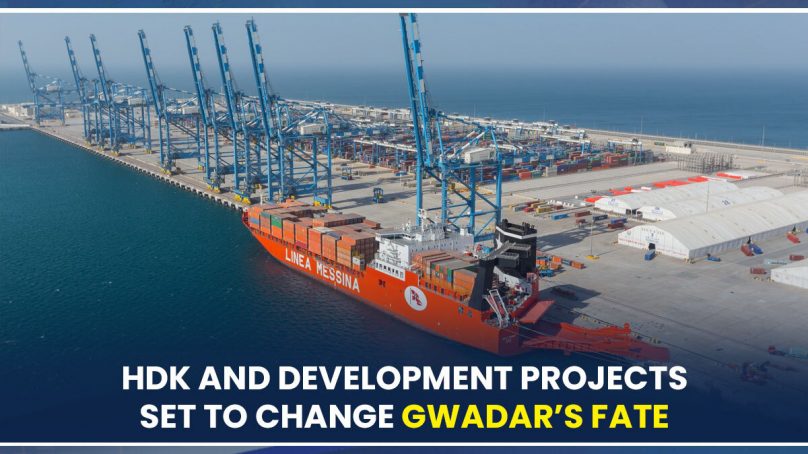 Of late, the news regarding the law and order of Balochistan’s port city Gwadar did the rounds on social media. The reason for the development was once again Maulana Hidayat Rehman of Gwadar’s Haq Do Tehreek and his colleagues who once again staged a sit-in for their demands.

However, this time the protest was not peaceful, challenging the writ and the law of the state. However, the Balochistan government countered the violent protest with force, by making arrests, enforcing Article 144 across Gwadar, and blocking mobile and internet services across Gwadar.

It has been the misfortune of Balochistan that this region, rich in natural resources, has remained backward due to political, personal grudges, differences and interests since the creation of Pakistan.

Suffering from poverty and terrorism, this province is fighting for its right to own its resources. There is resentment and a sense of inferiority and deprivation among the exploited people of this province.

Our political and military leaderships have, time and again, pledged to bring about peace and security in the province and change the people’s lot, but these have amounted to nothing but hot air. Many upliftment packages have been announced by successive governments, but the situation on the ground hasn’t changed much.

The fact is, there is a lack of sincerity in the approach towards Balochistan, and the ‘packages’ have been merely window dressing to obscure the state’s foot-dragging to allow the resource-rich province any agency over its affairs, chiefly with regard to the massive mineral resources that lie beneath its soil.

The sense of insecurity that prevails among the local residents has engendered rise to various separatist movements, which are working to sabotage Pakistan’s peace and security by becoming a tool of the country’s enemies.

It is expected that the Economic Corridor agreement between Pakistan and China will improve and change the situation in Balochistan.

But there are reservations regarding Balochistan, especially Gwadar, which is of key importance in the economic corridor project.

Gwadar, a warm water and deep-sea port located on the edge of the Arabian Sea in the southwest of Balochistan, is of global interest due to its unique geographical location.

In 2015, the China-Pakistan Economic Corridor (CPEC) project was decided between Pakistan and China.

Activities under this project got underway from the Gwadar port on November 13, 2016, and it was dubbed a game-changer.

But according to local politicians, basic amenities such as electricity, gas and water are still not available in Gwadar. But let’s talk about whether any steps are being taken in this regard.

Last year, the Haq Do Tehreek, whose main demands are the prevention of illegal fishing from the sea limits of Balochistan, the recovery of missing persons, the eradication of drugs from Makran including Gwadar, the rudimentary issues that have gained massive traction.

The sit-in for the rights of Gwadar also got attention at the national level and the protesters’ negotiations with the Balochistan government proved to be successful.

However, suddenly this year the Haq Do Tehreek, led by Maulana Hidayat Rahman staged another protest and alleged that their demands were not met.

But this time, surprisingly, the protest turned violent.

Shah Dad Baloch, a resident of Gwadar, told RAVA that now the situation in Gwadar is completely normal while the mobile network internet has also been restored.

“The fishermen are also going to the sea for hunting,” he added.

He said that there are more police and levies in some places so that if there is any untoward incident, it can be dealt with immediately.

Regarding the Haq Do Tehreek, he says that accusations are being levelled against Maulana Sahib, adding that he is doing all this for the sake of power, for it has been one and a half years since his movement, but no significant difference has been seen except that the issue of check posts has been relaxed. The issue of fishing trawlers, however, still remains unresolved, he says.

It is also said that Maulana Sahib has been launched to weaken the MPAs here since he’s affiliated with the Nationalist Party and enjoys the support of Jamaat-e-Islami as well.

Mr Baloch also claims that everyone involved in Gwadar should come together, that everyone has the right to peaceful protest, but that both individuals and government property should not be damaged.

There are Chinese people and individuals from other countries in the sensitive area of Gwadar.

There have been security issues regarding CPEC in the past, so the security of this region is of utmost importance.

Mt Baloch says that as citizens of Gwadar, we wish that while living in a democratic country, peaceful struggle or protest is a democratic right, but violence is wrong.

This has been the current situation in Gwadar; now let’s take a look at the basic problems of the city and the ongoing development projects regarding them.

For the past seven decades, Gwadar has faced the key issue of nonavailability of electricity. Iran supplies 17 MW of electricity to Gwadar through Turbat transmission line, which is insufficient.

However, the project of additional 100 megawatts of electricity from Iran is 90% complete; the cost of the project is 2.5 billion rupees, while the task to connect 100 MW Khuzdar-Panjgur transmission line to Markran will be done through Nag Basima. This project is also 75% complete.

Distribution of solar panels is also being carried out in far-flung areas, with 3,600 solar panels delivered thus far; another whopping 10,000 units are yet to be delivered.

GoP has approved the 300 MW Gwadar Coal Power Plant for 2025. For this, coal will be used. which the Chinese corporation will help in Gwadar.

The majority of the population’s electricity issues will be resolved by March 2023 thanks to Gwadar’s enhanced electricity capacity of 217 MW from 17 MW.

In rural regions, too, free solar plants are being offered.

With the growing population of Gwadar, the limited water resources are rapidly depleting. Shenzik Dam project is being implemented to supply water in Gwadar, the work of which is 98% completed; the cost of this dam is 11 billion rupees.

Through the M-8 segment (Awaran), Gwadar port will be connected to the North via the CPEC’s Eastern, Central, and Western alignments, through which only 23 miles will separate Gwadar from Ratodero.

Construction work is going on at the international airport in Gwadar. As per reports, the 4,600-ton steel structure of the main terminal building has been completed, and the entire construction is likely to be completed by June 2023.

As many as 2,000 boat engines have been distributed to fishermen of Gwadar in December 2022.

On the other hand, there is a massive uproar about Sindh fishermen’s unlawful trawling in Gwadar. The PMSA/Pakistan Navy lacks jurisdiction as it is a provincial affair following the 18th Amendment.

Sindh does not have any act to restrict fishermen in Karachi, while Balochistan’s fisheries department has limited resources as the provincial sea is huge.

The Council of Common Interests (CCI) was asked to resolve the issue but no meeting has been arranged for two years.

The governments of Balochistan and Sindh should resolve this matter wisely and judiciously.

The big news for the youth of Gwadar is that 500 acres of land has been acquired for the establishment of Gwadar University, the groundbreaking ceremony of which is expected in January or February 2023. Gwadar University will be affiliated with Shanghai Maritime University. Maritime Center of Excellence will also be built in it.

Also, 200 acres of land has been acquired for a fishing colony to provide shelter to the fishermen of Gwadar.

As for the health sector, Pakistan China Friendship Hospital (PCFH) Gwadar is a functioning, 70-bed hospital. By turning over this facility to Indus Hospital, another 100 beds are being supplied during Phase II.

Security and law and order situation in Gwadar

In Gwadar, excessive check posts have been abolished, while there are only two common check posts for security.

The provincial government has been allocated funds for three border markets at Gabd, Mand and Chedi, which will be connected to the M-8 coastal highway.

Status of Telecom Services in Gwadar

Poor telecommunications connectivity is another issue in Gwadar, for which VBox is now functioning and optical fiber will soon be completed.

It is the responsibility of the Government of Balochistan to construct the Border Markets as soon as possible for which they have received the required funds.

On the other hand, the matter should be resolved as soon as possible in the Council of Common Interest or any forum or committee for illegal fishing.

It cannot be denied that the Haq Do Tehreek has emerged as the powerful voice of Gwadar, and it’s hard to write off Maulana Hidayat Rahman’s clout and majority in local political circles. The success of the Haq Do movement in the municipal elections in Gwadar is a clear proof of this.

However, Maulana Sahib also has to keep his protest peaceful and keep his demands within the ambit of the constitution and law. He should also refrain from challenging the writ of the state.

Last but not least, the Balochistan government should endeavor to resolve this issue with patience and tolerance and should take the Haq Do leadership into confidence regarding the legitimate demands of the people.

Balochistan is also a soft target for terrorism and enemies of Pakistan’s peace, and in such a situation, the anti-national forces and militants will take advantage of the ongoing tussle between MPA Mir Hamal Kamalti Sahib and Maulana Hidayat Rahman.