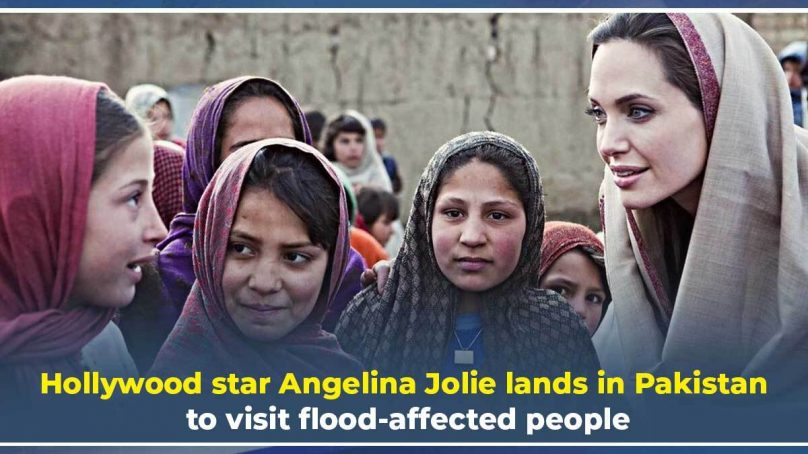 Hollywood actress, activist, and humanitarian Angelina Jolie touched down in Pakistan on Tuesday in order to help and directly address flood-affected people. Jolie is currently visiting Dadu, Sindh, where she is assessing the scale of devastation caused by the floods.

Jolie has come to see and comprehend the situation, to learn about the needs of the people, and to take action to stop future suffering, according to a news statement from the International Rescue Committee.

According to reports, the actor took a boat to scout the region in Johi and its surroundings before flying into Dadu’s Zamzama oil fields. She is expected to help those devastated by the flood.

In 2010 and 2005, Jolie travelled to Pakistan to meet with earthquake victims. She is here right now as a part of the emergency response efforts of the International Rescue Committee (IRC).

The Tomb Raider star will draw attention to the need for immediate assistance for Pakistan’s citizens as well as long-term solutions to the crises of climate change and mass migration.

In a news release, the IRC expressed optimism that her visit would spur action and immediate assistance from the world community, notably the US, which is the country with the highest carbon emissions.

“The climate crisis is ruining lives and prospects in Pakistan, with serious effects in particular for women and children,” said Shabnam Baloch, country director of IRC Pakistan.

“Food insecurity and an increase in violence against women and girls are expected to result from the economic damage brought on by these floods. To help those in immediate need and to halt climate change from damaging our common futures, we need both immediate assistance and long-term investments. We are hoping that Angelina Jolie’s visit will inspire the world to wake up and take action as more rain is forecast in the upcoming months.”

According to the Committee’s most recent assessment, people urgently need access to food, safe drinking water, shelter, and medical treatment. According to a poll, both women and young girls lack access to menstrual hygiene products. More than 50,000 women and girls have received humanitarian aid from the IRC, including hygiene kits to address the hygienic issues mentioned by women.