Home  »  Editors Choice   »   IHC’s Historic Decisions: Will They Be Implemented? 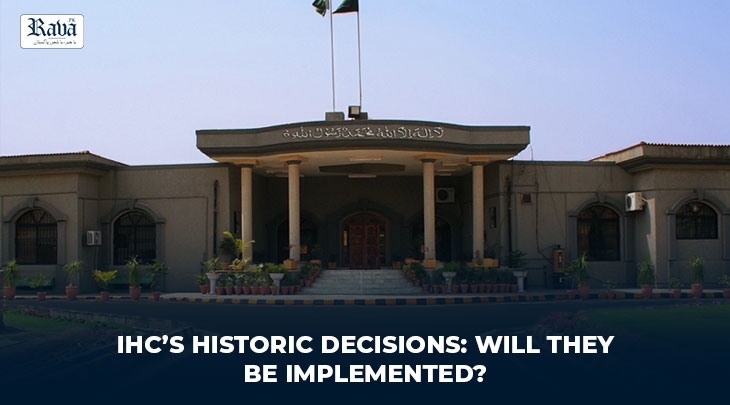 The Islamabad High Court has made history. Last week, the IHC ordered the razing of a navy golf course in Islamabad, which came on the heels of demolition orders of two Pakistan Navy projects, including farmhouses and a sailing club. These decisions are bold and significant in that they hold powerful entities accountable for misusing their position and breaking land use rules.

In the more recent case, the court decided that the golf course was established illegally in a protected park area and that the navy had encroached on state land without legitimate authority and jurisdiction. It has directed that the land be sealed and that CDA and the Islamabad Wildlife Management Board be given custody of it. The golf course should be pulled in within four weeks unless it can be used for an environmentally friendly activity. In addition, the court ordered the CDA chairman to investigate the development of Monal and other restaurants on national park territory.

If these orders are enforced, they will send a powerful message to society’s elite. Similar directives about the illegitimate use of land have been witnessed all too often in Karachi, where wedding halls and shopping complexes have been built on land assigned for specific military use. Nevertheless, these directives are often not adhered to, nor is there any follow-up. One wonders why only the no-so-powerful segments of society are forced to comply with the orders.

For example, In the recent Nasla Tower case, the Supreme Court had expressed its resentment with the Karachi commissioner on more than one occasion for not completing the demolition process in time. In yet another instance, the authorities acted swiftly when the apex court directed pulling down Empress Market shops. The fact is the laws are different for the high and mighty of the land compared to those with less clout and fewer connections.

Worse, court orders are often ignored, delayed, or simply not complied in situations where the owners and investors of illegally built property and recreation projects are influential. But this latitude is not extended to projects where unprivileged members of the public have a stake. And this is illustrative of the authorities’ incapacity or lack of It is a sorry reflection of the authorities’ inability or lack of willingness to enforce court orders that collide with the interests of the elite.

The IHC order to raze the navy projects is no doubt bold and historic. But the question is: Will it be implemented with the same alacrity as Nasla Tower that now stands pulverized?  The jury is out!