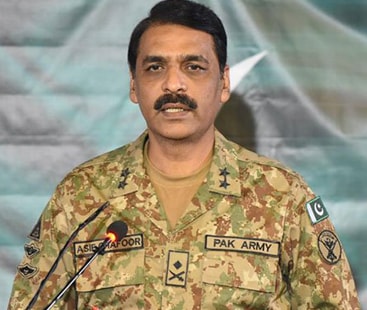 He said such blatant lies and staged dramas are Indian disinformation manoeuvre to divert world attention from increased atrocities by Indian Occupation Forces inside occupied territory.

DG’s response came after Indian media claimed that Indian Army has foiled an infiltration attempt by a Pakistani BAT (Border Action Team) squad in Keran Sector where 5-7 Pakistani army regulars were eliminated and their bodies are lying on the LoC.

It is pertinent to mention here that Indian Army used cluster ammunition to target the civilian population across the Line of Control (LoC) in Azad Jammu and Kashmir (AJK) in violation of the Geneva Convention and international law earlier today.

The Indian military, on the intervening night of July 30 and 31, targeted innocent citizens including women and children in Neelum Valley through artillery using cluster ammunition – resulting in the martyrdom of two civilians, including a boy, as per the statement of ISPR.

“This is [a] violation of Geneva Convention and international humanitarian law,” the ISPR stated, adding that the use of cluster ammunition is prohibited under the Convention on Cluster Ammunition because of its severe impact on non-combatants.

“This blatant Indian aggression against all international norms exposes true character of Indian Army and their moral standing,” the statement read.

It added that it was time for the international community to take notice of “this Indian blatant violation of international laws” on use of cluster ammunition in targeting innocent citizens.

Use of cluster bombs by Indian Army violating international conventions is condemnable. No weapon can suppress determination of Kashmiris to get their right of self determination. Kashmir runs in blood of every Pakistani. Indigenous freedom struggle of Kashmiris shall succeed,IA.

DG ISPR in a tweet said no weapon can suppress determination of Kashmiris to get their right of self determination.