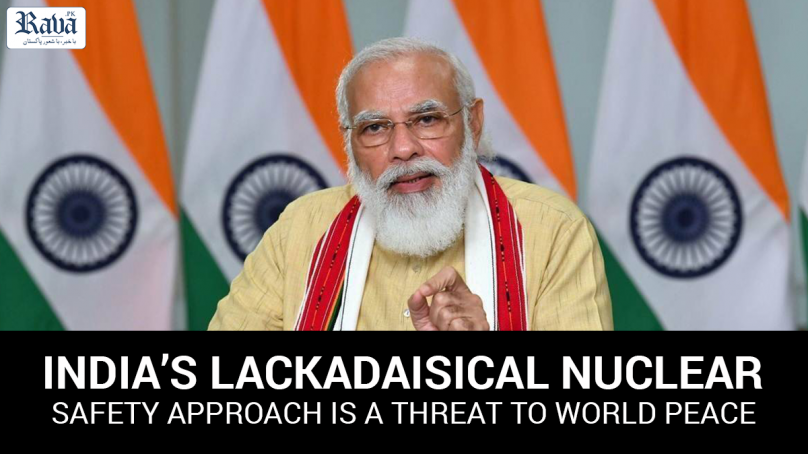 But why is this news so sensitive and why is uranium sales so dangerous? The answer is that uranium is the primary and most important component used in nuclear weapons.

Let’s take a look at the 2020 report of the Nuclear Threat Initiative, a US think tank working on nuclear issues.

According to the report, Pakistan had recorded the highest improvement in nuclear content in the Nuclear Security Index, while according to the same report, since 2012, Pakistan’s points in the security and control category have increased compared to other countries.

On the other hand, in the overall ranking of nuclear material safety, Pakistan is one place above India. Pakistan also ranks five times better than India in preventing nuclear sabotage.

According to the report, Pakistan has adopted new procedures for security and cybersecurity at facilities and has taken better measures to prevent internal threats.

Surprisingly, this is not the first time that uranium theft from India has come to light. In 2018, one kg of uranium was recovered from Kolkata. The police had arrested the accused and the concerned agencies had also conducted an investigation but the report of this incompetence has never come to light. In 2016, a large quantity of nine kilograms of uranium was seized from Maharashtra. In Rajasthan’s Rawatbhata nuclear plant, 40 people were affected by radiation in two incidents in the last five weeks.

The Indian media rarely reports such incidents. However, the Indian government sometimes reports such incidents to meet the requirements of the International Atomic Energy Agency (IAEA). According to international media reports, on 25 February 2004, India reported to the IBEA 25 cases of “missing” or “stolen” radioactive material from its labs. Fifty-two percent of incidents were attributed to “theft” and 48 percent to “lost mystery.” India claims to have recovered lost goods in 12 of the 25 cases. However, he acknowledged that the other 13 cases remained a mystery.

The biggest question is how did uranium get into the hands of unscrupulous people and unsafe people despite being under tight security?

Despite such tight surveillance of uranium, nuclear theft and smuggling is a testament to the incompetence and corruption of Indian institutions, and the question is whether such sensitive theft is possible without the complicity of those in charge of so many important institutions.

There are also bizarre stories of uranium theft in India. Sometimes nine computers belonging to the Indian Defense Research and Development Organization are stolen at Metcalf House in Delhi. Sometimes three cobalt switches are stolen by ‘thieves’, whose Worth in the millions. A consignment worth Rs 1.5 million (worth 24 24 million on its way to North Korea) was seized from Tata Steel’s laboratory in Jamshedpur (Jharkhand). So once a ship carrying aluminum oxide from India to North Korea was stopped by the Taiwanese authorities. And New Jersey-based Indian engineer Sitaram Ravi Mahidoon has been accused of ignoring US export procedures to send blueprints of solenoid-operated valves to North Korea.

India has reported 25 cases of ‘stolen or lost’ uranium to the IREA. Uranium in various quantities and forms has been exported from scrap dealers and others.

Millions of radioactive resources are used in various applications around the world. Only a few thousand sources, including Co-60, CS-137, Ir-192, SR-90, AM-241, Cf-252, P-238, and RA-226, are considered security risks. The Pakistan Nuclear Regulatory Authority (PNRA) has enacted a system of strict measures for administrative and engineering control of everything from radiation to radioactive sources. It periodically inspects and verifies resources to ensure safety.

The authority has launched a five-year national nuclear safety and security action plan to establish a stronger nuclear security regime. In addition to the deployment of radiation detection equipment at each entry point for nuclear material in Pakistan, a training center and an emergency coordination center have been set up, where vehicle / pedestrian portal monitoring equipment has been completed as required. Is.

Fixed detectors have been installed at airports, as well as random inspections of personnel equipment. All nuclear materials, from import to disposal, are subject to strict regulatory control.

Nuclear control in India is no more stringent than in Pakistan. It is beyond comprehension why the Indian and international media do not pay attention to the critical issue of nuclear security in India.

It cannot be ignored that from the point of view of strategic stability in South Asia, the impact of India’s insecure nuclear stockpile could be dangerous for the entire region.