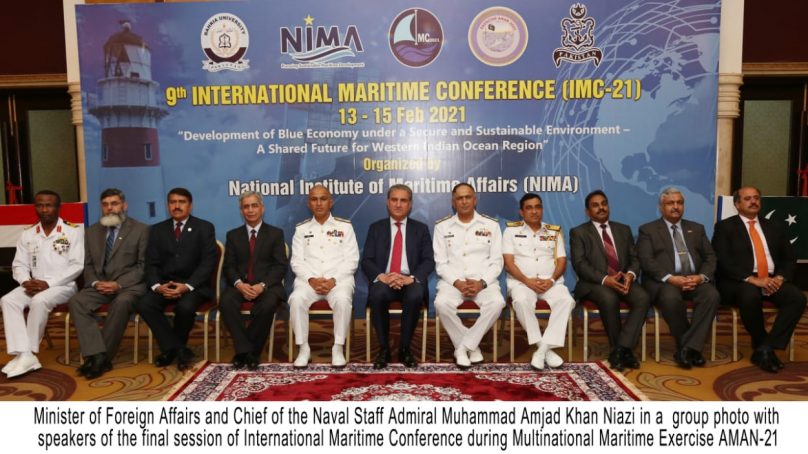 International Maritime Conference: Blue Economy is the Pressing Need of the Hour

Today was the last day of the Ninth International Maritime Conference under the auspices of Pakistan Navy, where Foreign Minister Mehmood Shah Mehmood Qureshi attended as a special guest.

According to the details, the theme of the conference was “Development of Blue Economy in a Sustainable and Safe Environment, Participating in the Future of the Western Indian Ocean Region”.

The conference was attended by intellectuals from all over the world while Foreign Minister Shah Mehmood Qureshi and Minister of State for Climate Change Zartaj Gul attended as special guests. 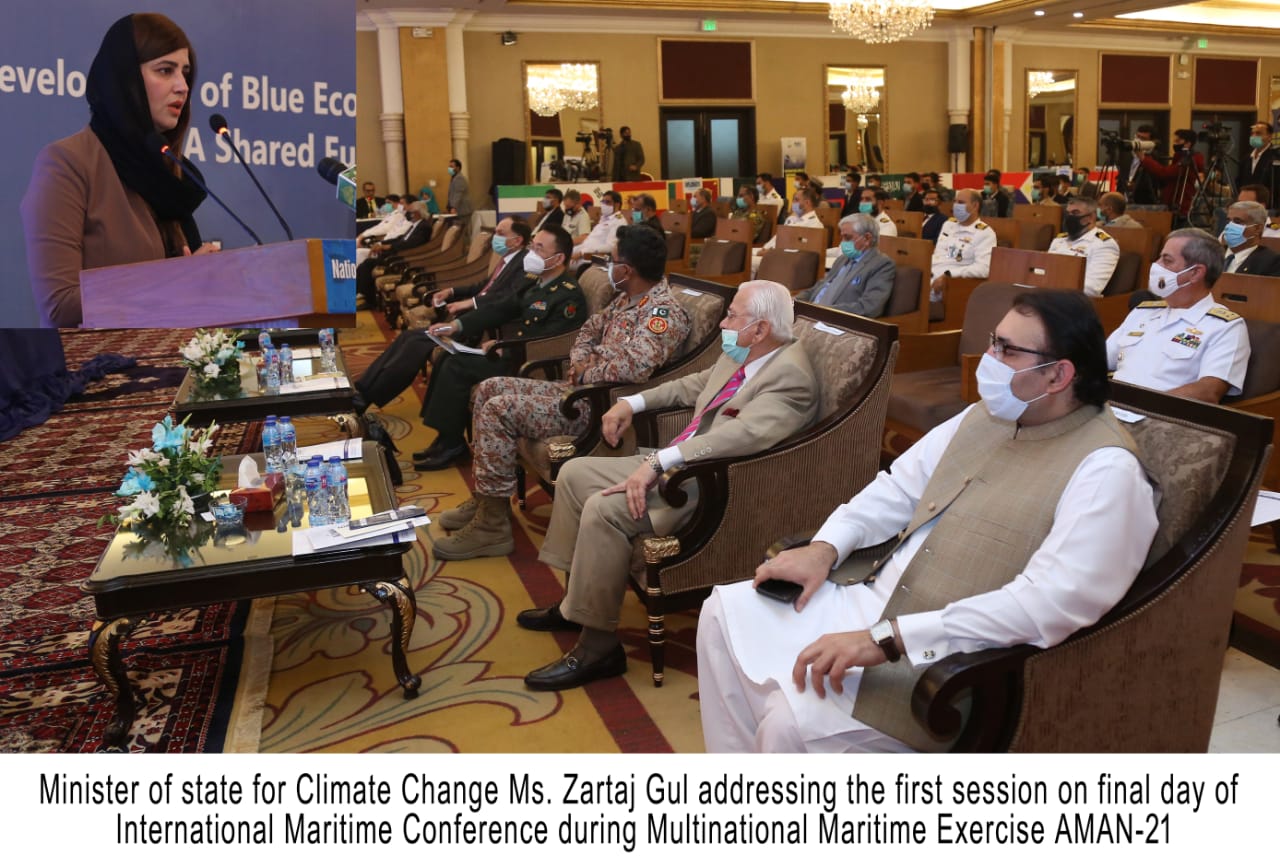 Addressing the function, the federal minister said that for the first time the policy of Blue Economy was presented by our government, marine tourism has unparalleled potential on the coast.

The government is taking all possible steps to promote marine tourism.

One billion mangroves will also be planted under the Billion Tree Tsunami to protect aquatic life, a global community that also needs to mitigate the effects of climate change.

Pakistan has a score of 8 to 5 due to climate change, and, despite economic problems, it is working to protect the marine life.

Zartaj Gul added that all politicians are united in the national interest. “We need to work for the protection of marine life, we paid many dollars to see green turtles in America and could only see one turtle, here we have these turtles that get crushed under cars.”

Addressing the ceremony, Foreign Minister Shah Mehmood Qureshi said that the role of Pakistan Navy was commendable for peace.

The foreign minister said that the Blue Economy needs time, the Indian Ocean is the world’s largest ocean, which is the economic hub of the world.

Regarding dealing with any aggression by India, the foreign minister clarified that Hindutva is a major challenge for which Pakistan is taking all possible steps for its security.

Mr Qureshi also said that Pakistan is a maritime state, adding that CPEC is a game changer of the country.

Addressing the ceremony, Admiral Amjad Khan Niazi said that he congratulated the Pakistan Navy for hosting multinational exercises in the name of ‘Peace’ every two years since 2007.

“I remember that the Pakistan Navy started this effort to promote peace and harmony in the Indian Ocean region. A large number of foreign navies are involved, along with ships, aircraft, special operations forces, marine teams and observers,” he said.

“I am pleased that the number of countries participating in these naval exercises has increased from 28 to more than 40 this year compared to 2007. The successful conduct of these exercises is a testament to Pakistan’s commitment and efforts to promote global peace and security.”

The blue water economy is a relatively new concept. It highlights the importance of the oceans and seas being effective in socio-economic development. It is a broad concept with many facets. It covers all sectors, including renewable energy, fisheries, coastal tourism, waste disposal, maritime transport, marine engineering and climate change.

A sustainable blue economy is key to achieving social and economic benefits for the benefit of present and future generations.

According to economists, the global blue economy has a potential of more than 24 trillion US dollars.

In addition, it could have far-reaching implications for the region in the decades to come.

The Indian Ocean is the third largest body of water in the world. As well as its importance to global security, its position as an international trade route is growing day by day.

Growing prosperity in Asia, increasing dependence on the flow of natural resources has further reduced the region’s distance from the global system of supply and delivery of goods to consumers in the Middle East, Africa and Asia.

The Indian Ocean carries global maritime traffic, including half of the world’s container cargo, one-third of its mass cargo, and two-thirds of its oil shipments.

The Indian Ocean offers the best opportunity for co-operation and collaboration, but geo-strategic competition and the desire for military domination of some countries have severely hampered this capability.

India’s war frenzy and aggressive policies, especially under the influence of extremist Hindutva thinking, pose immediate and lasting threats to global and regional peace and security.

As a result of its hegemonic ambitions, India has posed a nuclear threat to the Indian Ocean and is installing modern warfare systems and weapons to deliver nuclear material in naval warfare.

In view of this, Pakistan is maintaining its minimum defense capability to make all necessary arrangements to ensure security.

The international community must realize the fact that any military conflict in South Asia will destabilize the region, which could jeopardize global trade and security.

Pakistan is an important maritime state with a thousand kilometers of coastline and a vast economic zone. Pakistan’s maritime sovereignty covers 290,000 square kilometers, which is about 36.4% of the mainland.

Pakistan’s maritime areas are rich in biological and neutral resources.

Pakistan is a key player in the Indian Ocean security framework, which includes issues such as the elimination of piracy and the prevention of human and drug trafficking.

We are proud that the Pakistan Navy is effectively dealing with security threats to Pakistan’s shores and territorial seas to keep the shipping lanes free from illegal activities and malicious elements.

The Pakistan Navy has always been commended for its efforts to promote peace and security. In the wider interest of global and regional maritime security, among others, our Navy has actively participated in Joint Task Forces 150 and 151.

Our navy has provided cash assistance to ships facing difficulties in the deep seas, including counter-piracy operations and, on a number of occasions, humanitarian assistance to countries in the region.

An example of such an effort is the departure of one of our naval ships on a mission to deliver humanitarian aid to Africa.

The port of Gwadar is located at a strategic location at the confluence of the Strait of Hormuz and the North Arabian Sea. Gwadar Port has the potential to be used as a regional hub and transit port.

In this sense, Pakistan is at a crossroads that connects its coastless Central Asian states by sea to facilitate the movement of their oil, coal and agricultural commodities.

Gwadar Port offers new business opportunities. From life-saving drugs to maritime tourism, development of land and property along the coast and development of industries are the sectors that are attractive for domestic and foreign investment.

Pakistan Liner Shipping Links Index (compared to Australia) is significantly better. Our maritime sector needs significant investment to help build, operate and maximize profits. However, the sector is still lagging behind in terms of revenue.

Recognizing this importance, our government has made the maritime sector a top priority and is focused on developing it.

We have taken a number of steps to make Pakistan’s ports available for regional transshipments, including improving port infrastructure.

2020 was declared the year of the ‘Blue Water Economy’ which was an attempt by our government to highlight the full potential of this sector so that this potential can be utilized for sustainable growth and economic growth in the country.

The former Ministry of Ports and Shipping has been given a new identity to the Ministry of Maritime to expand its activities and scope.

I would like to point out some of the areas that have been overlooked so far.

The fisheries sector contributes only 0.4% to the country’s GDP.

* According to an estimate, maritime tourism in Pakistan can contribute 4 billion US dollars to the economy.

* Pakistan is the sixth largest owner of mangroves in the world.

To make the Blue Economy a hub for regional economic development, there is a need to spread awareness among all stakeholders and make them aware of its economic, social and environmental benefits so that investment in these related sectors can be made through environmentalization. Could be promoted.

As part of economic diplomacy initiatives, the Ministry of Foreign Affairs and Pakistan’s embassies abroad are playing an active role in encouraging investment in the maritime sector through a joint process of relevant ministries.

In this regard, it is necessary to make a collective effort through a joint process. To achieve this goal, businessmen, intellectuals, research institutes, social and environmental organizations must move forward in a spirit of partnership to reap the benefits of this sector.

Pakistan is fully aware of the importance of securing the world’s oceans. These are the common heritage of mankind. These maritime resources must be used for the socio-economic development of humanity, as well as the responsibility to protect the environment on a sustainable basis.