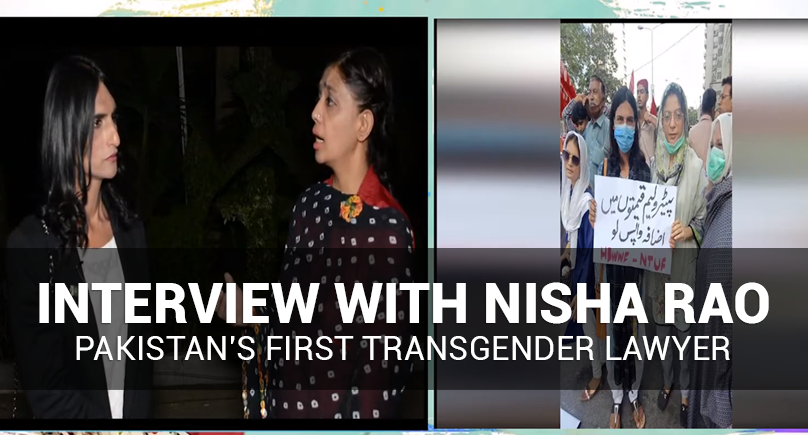 Who says hard work doesn’t pay off or you don’t get what you want? Tough times, cruel society, being away from your loved ones, cracked relationships, broken hearts, and impediments strengthen an individual against all odds. When the individual regains their composure, then success becomes inevitable, and no fear can frighten them.

When a person has courage and true devotion, they can climb up to the sky with nothing to stop them from getting what they want!

And today Rava met one such courageous personality!

Being a transgender, she knew she’s different from others. She left everything behind and stood in the scorching sun so that his parents and siblings could walk with their heads high without getting humiliated by our cruel society. Although the people won’t stop, the one who bears with it does the wonders!

Nisha Rao is one such person who has an inspiring story to tell. She is the first transgender to have studied law not only in her community but also throughout Pakistan. In a society that regards people’s opinion so highly, Nisha managed to get herself recognized as a lawyer.

Talking to team Rava, Nisha told the story of her most daunting journey. Pakistan’s first transgender lawyer Nisha said that she spent ten years of her life on the streets of Karachi.

‘I attained this position after immense suffering.  I begged on the signals for ten years; this journey was not easy. When I left home, all the problems that I never faced at home occurred one by one and sometimes all at once. It was very difficult; the attitude of the society, the family’s rejection haunted me. After a year of begging, I stood up for myself and continued my education after matriculation,’ Nisha said.

“I thought why not get education and work hard to do something for myself and my community.”

She used to beg in the morning and take her classes in the evening. Nisha told Rava that after all this, my teacher, Mudassar Iqbal Chaudhry, advised me to study law. He encouraged me and advised me to practice law. Get education and be the voice of your community against violence.

To put this advice into practice, Nisha Rao graduated from Sindh Muslim Law College with a degree in law and now she fights for the cases of other people, including transgenders.

In response to Rava’s question, Nisha Rao said that the experience of begging was not that bad for me as people used to help me when they knew that I was studying and whatever the circumstances, the society helped me in a very good way, adding that they accepted and supported me.

There are laws in this society but it is necessary to have separate wards for them in the hospital. Even in jail if there is any prisoner they are kept with the male prisoners. I want to work on all these issues that the people of my community may also be able to move forward in the field of education in order to learn skills and be accepted by the society in a better way.

In reply to a question, Nisha said that there is a misconception regarding them that they take the form of transgender just to earn some money.  She added that the government should make better laws for transgender people so that criminals could not harass or torture transgenders.

Rava also spoke to Nisha’s mentor, Mudassar Iqbal Chaudhry. When he saw Nisha’s desire of wanting to do something for her community, he advised her to become a lawyer and Nisha set a precedent with hard work and commitment.

In response to a question, Mudassar Iqbal said that a lot of people praised me. However, some people also criticize me for having supported a transgender. “People still talk but I have given a stronger person to the society and now the situation will hopefully improve in future,” she said.

Nisha Rao, with her hard work and dedication, has brightened her dark life with education and made herself a beacon for the society. The society should accept transgender people with open arms, and they should be treated as human beings.