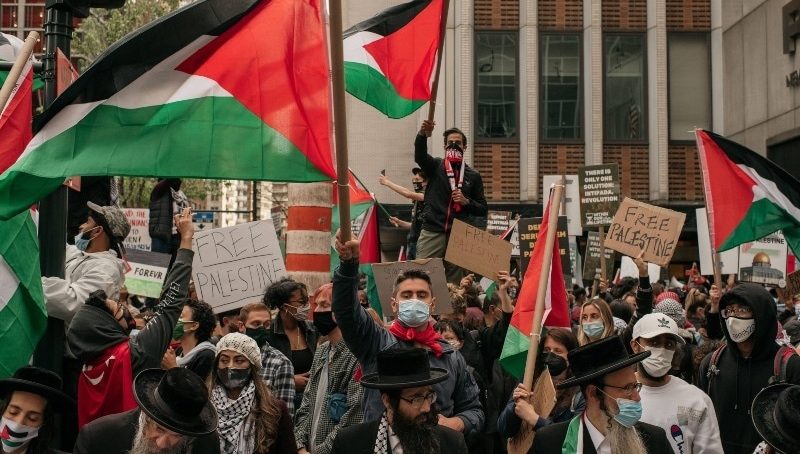 The black smoke rising from all sides, the sound of bombs exploding in the hearts, the piles of debris all around, the sobbing, the sighing. Is it so scary? Which city is this place where there are piles of corpses? What kind of din is this?

This is not a story or a myth, but the story of a city of a leading jihadi nation that has told the Islamic world that one does not have to lose for one’s rights; no matter how difficult the war is, one does not have to run away from it. No matter how powerful the enemy is, there is no need to hide in fear. This is the story of the Palestinians who endured Israel’s atrocities and barbaric attacks. This is the story of those who conquered paradise on earth for themselves.

The issue of Palestine is a great human tragedy, and it is not a matter of today or tomorrow.

If the occupation fire was not tolerated by Israel, then from the beginning of the Muslim holy month of Ramadan, a series of Israeli attacks on Palestinians and other acts of violence began in occupied Jerusalem, while a surge in tension in the extremely holy city for three major religions, which Pakistan has strongly condemned.

The Israelis unleashed a barrage of oppression on helpless Palestinians, rained rubber-coated bullets on worshipers, shelled them, hurled bombs, and set fire to mosque carpets.

More than 300 Palestinians were wounded in the attacks, yet the Palestinians became a wall of courage, refused to bow to Israeli atrocities, hurled stones at the occupying forces and declared the protection of the first qiblah to the last.

The ruthless Israelis did not spare the women and arrested them mercilessly. The brave Palestinian girl was handcuffed and kept smiling. Outside the Al-Aqsa Mosque, a Jewish citizen drove over the Palestinians, but the war was unilateral.

Violence in Occupied Jerusalem since Friday, May 7, is the worst since 2017, with long-running efforts by Jewish settlers to evict several Palestinian families from the area of ​​Sheikh Jarrah in East Jerusalem.

This is an area where several Palestinian families have been evicted in a long-running legal case, an appeal filed by Palestinians in the case was due to be heard on Monday, May 10, but was postponed by the Ministry of Justice due to tensions.

The next day, May 8, worship was resumed at Al-Aqsa Mosque, but according to the Palestinian Red Crescent, Israeli forces carried out violent operations in the eastern part of Jerusalem, injuring 121 more Palestinians, most of them with rubber bullets. And grenades were hurled, while Israeli forces said 17 of their men were wounded.

On the morning of May 10, Israeli forces once again resorted to violence near Al-Aqsa Mosque, injuring 395 more Palestinians, more than 200 of whom were taken to hospital for treatment.

Hamas fired dozens of rockets into Israel, including a barrage, which turned off air strikes sirens far from Jerusalem after an Israeli airstrike wounded 300 Palestinians.

Later, on the night of May 11, the Israeli air force once again justified rocket attacks by bombing Gaza, bringing the death toll to 43, including 13 children. These rocket attacks were also carried out by Hamas. Five Israelis were killed and several others were injured.

Gaza’s health ministry said on May 12 that the death toll from Israeli airstrikes had risen to 48, including 14 children, and that more than 300 had been injured.

Israeli warplanes did not stop their barbarism and terrorism on Eid al-Fitr and carried out more airstrikes on high-rise buildings and other places in Gaza, bringing the death toll to 103 so far. 24 children are also among those killed.

Israel continues to bomb Gaza, targeting another high-rise building that destroyed the offices of Al Jazeera and other international media outlets, including the Associated Press (AP).

According to foreign news agencies, the owner of Al-Jala Tower had already warned the media about the Israeli attack and the building had been evacuated.

The UN Secretary-General also expressed concern over Israeli atrocities, calling on Zionist forces to stop atrocities on Palestine and construction in occupied Jerusalem.

According to Turkish media, the situation in Al-Aqsa Mosque after the Israeli attack was discussed during the telephone conversation.

Turkish President Recep Tayyip Erdogan strongly condemned the attacks on Palestinians, not on Muslims, but on humanity. This is the persecution of the Palestinians. Turkey is with its brothers in difficult times, will raise this issue all over the world and in the Muslim world, will continue to defend the sanctity of Jerusalem. The Palestinian cause is high on our agenda.

White House Press Secretary Jane Sackie said the Biden administration is “deeply concerned” about the escalating violence between Israel and the Palestinians. “We are closely monitoring the situation in Israel and we have reservations about the current situation,” he said.

The Foreign Office said in a statement that Pakistan “strongly condemns the attacks on innocent worshipers at Al-Aqsa Mosque by Israeli occupying forces.”

It was said that such attacks, especially during the holy month of Ramadan, violate all human values ​​and human rights laws.

“We pray for the speedy recovery of the injured and reiterate our continued support for the Palestinian cause and call on the international community to take immediate steps to protect the Palestinian people,” the State Department said in a statement.

“For lasting peace in the region, we reiterate the need for a two-state solution to the pre-1967 borders, in accordance with UN and OIC resolutions, and for an independent and connected Palestinian state,” the statement added.

A series of protests around the world

Protests over Israel’s brutal bombing of Gaza and the massacre of Palestinians have spread around the world. Silence is beginning to break.

Thousands marched on the Israeli embassy in London during a protest against Israeli atrocities in Gaza.

In addition, anti-Israel rallies were held in many cities around the world, including the United States, France, Germany, Spain, South Africa, Belgium, Ankara, Baghdad and Lebanon, while rallies are also being held in different cities of the country in Pakistan.

According to the news agency, Israeli fighter jets have carried out 55 air strikes on Gaza and bombed civilian populations this morning.

The targets of this morning’s attacks included several Palestinian military and security bases. It is reported that a 4-storey building in the middle of Gaza was also bombed.

According to the report of AP news agency, Israeli Prime Minister Netanyahu has signaled to continue operations in Gaza despite international efforts.