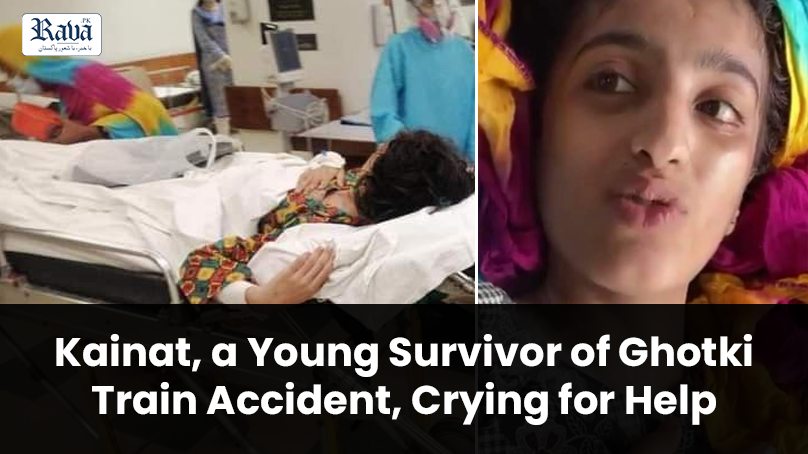 The hardest thing in my life is to condole or sympathize with someone. Today, sadly, I have to go through this tribulation as in front of me lies a severely injured innocent girl wrapped in bandages. And when she saw me, she smiled and asked me to pray for her quick recovery from the mental and physical trauma. She said that although she was not at the funeral of her parents, she was praying for them. She asked me to pray as well.

This 13-year-old patient lying in a bed of the biggest hospital in Karachi is lucky to be among the survivors of the Ghotki train accident and unfortunate to have lost his parents and brother at such a young age.

While the Ghotki train accident has once again raised questions about the performance of the railway administration, it has also left behind many tragic stories. Whenever these stories are remembered, tears will surely come to the eyes of every human being.

Immediately after the accident, when she landed in a local hospital, Kainat appealed to the Prime Minister of Pakistan Imran Khan, saying: “I should be treated in a good hospital because according to the doctors, my treatment will cost millions of rupees which I cannot afford.”

Taking note of this emotional video of the girl, Sindh Chief Minister Murad Ali Shah issued orders to transfer Kainat to Aga Khan Hospital in Karachi for further treatment. The unfortunate accident claimed five family members of her family, including his parents and young brother, while she sustained serious injuries and a fractured leg.

When I arrived to see her, I could not understand what she was saying. Talking about the accident, she said: “We were going to Toba Tek Singh from Karachi for my brother’s wedding. I was sleeping on the berth upstairs when the accident occurred. I can barely remember anything except that I got stuck in the mud and I heard my mother asking for help. After that I fainted due to severe pain. I was taken out and laid out, but no one saved my mother.

Kainat was first rushed to a local hospital and then to Sheikh Zayed Hospital in Rahim Yar Khan. She was later shifted to Railway Hospital in Karachi and then to Jinnah Hospital, Karachi. Due to the risk of infection, she was shifted back to Railway Hospital where after inadequate facilities and video notices and on the suggestion of Pakistan Navy officials, the young girl was shifted to Pakistan Navy’s Shifa Hospital. But, according to the Sindh government, she was moved to the Aga Khan Hospital on the special instructions of the chief minister and Bilawal Bhutto, and all possible medical facilities are being provided to her.

But the question is: will that be enough?

Kainat said that this hospital is exactly like the palaces in the stories and everyone is very good. “They take good care of me,” she says. “Many people are coming to see me. I am in a lot of pain but I am also very brave.” Although she is much better now, it is still difficult to say when she will be able to stand on her own feet because she has a severe fracture in one of her legs.

Looking at the condition of the girl with the yellow face and parched lips, it is not at all difficult to conjecture that she also has severe anemia. According to the staff, the girl is under severe emotional stress and needs psychological help.

Talking to Team Rava, Kainat thanked Prime Minister Imran Khan, Bilawal Bhutto Zardari and Chief Minister Sindh and said, “Thank you all for treating me so well and now I have an appeal to them that my Give my brother a job, give us a small house and pay my monthly tuition because I don’t have a father anymore.”

It should be noted that Kainat’s father Riaz Malik had been living in Karachi for the last 25 years. He lived in a rented house in Bilal Colony where he also worked as a life insurance agent. Kainat is currently a ninth grader at Takbir High School and wants to become a doctor.

In this sense, Kainat is lucky that her video has been noticed and she is being provided the best medical facilities. But what will happen when she is treated? Who will pay for the education of this poor orphan girl? Who will pay for the expenses of the month? Who is listening to her impassioned appeals? There are many promises and claims, but it is the responsibility of the state to go ahead and handle it.

Ambassador of the republic of Korea calls on Air Chief