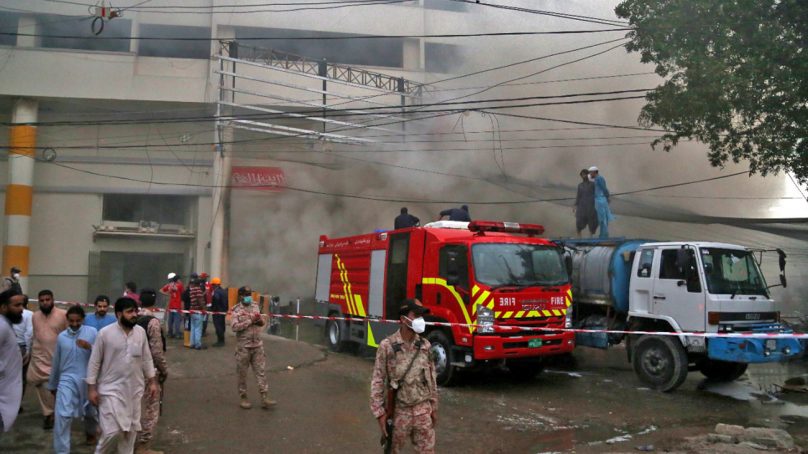 A completely avoidable calamity has rendered dozens of families homeless, snuffed out a young student, and drained the Karachi fire department’s resources.

Preliminary reports suggest that the owners of a superstore chain had stocked up on cooking oil in the basement of a residential building near Karachi’s Jail Chowrangi. The store owners hoped to make a substantial profit on their stock because they expected the market to run out of oil soon.

Last Wednesday, a fire broke out in or near the storage facility for reasons yet to be ascertained, killing one person and wounding three others. Hundreds of firefighters and dozens of fire departments battled the blaze for more than 50 hours, which apparently kept rekindling due to the high amount of cooking oil present.

To put out the fire, about 800,000 gallons of water were used. As a result of the damage to the structure, the building has been designated ‘hazardous,’ displacing hundreds of tenants.

In recent years, most residential and commercial constructions in the city have shown a disturbing disregard for fire, general safety, and construction laws. Ordinary citizens are inevitably paying the price as authorities tasked with keeping a check on risky behaviors continue to look the other way as long as they are being “incentivized” well.

An investigating team must figure out why the superstore was allowed to convert a residential building’s basement, which was supposed to be utilized as a parking space, into a warehouse for explosive goods, as well as who gave it permission. All individuals involved should face criminal charges in order to send a strong message to all businesses and builders operating in the city that public safety should always come first. The government should also make sure that any losses incurred by families and people as a result of this store’s carelessness with public safety are appropriately reimbursed.