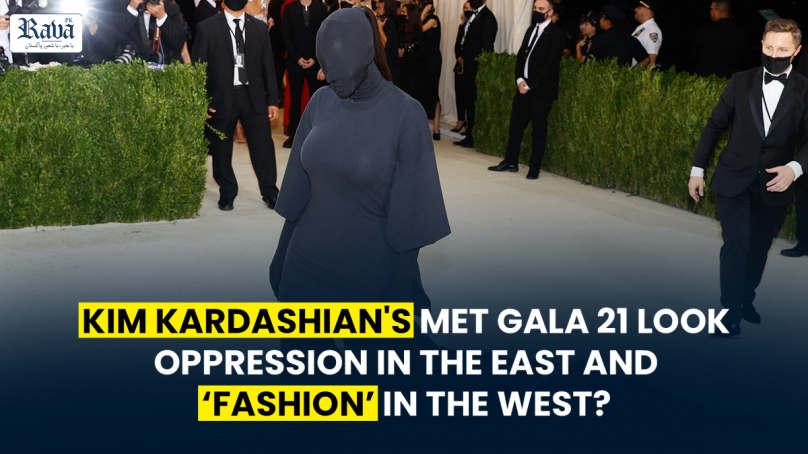 Though she is a veteran dresser, American media mogul Kim Kardashian became the talk of town for choosing to wear her most controversial ensemble to date at this year’s Met Gala extravaganza.

The 40-year-old A-lister was covered in a full-length Balenciaga getup complete with balaclava and only showed off her floor-length ponytail. It became one of the major talking points on social media with many people fuming at the uncommon look.

People have highlighted the hypocrisy in what the fashion icon was wearing by referring to numerous hijab bans in the West.

The Skims founder has sparked a raging debate on Twitter about whether she was moved by or paying tribute to burqa-clad Afghan women.

Many people have taken to Twitter to praise the Hollywood star for sending a strong message about the plight of the oppressed women in Afghanistan under Taliban rule.

One Twitter user noted: ‘I think Kim Kardashian’s costume at the Met Gala was dazzling. She’s brought home the reality of what’s happening in Afghanistan. I think it’s a fantastic statement.’

Another observed: ‘Am I the only one applauding Kim Kardashian’s way of increasing awareness about dehumanization of women in Afghanistan and other Islam radical governments?’

Others felt the striking outfit was generally in bad taste with many calling Kim a hypocrite.

The head-to-toe ensemble was called ‘disrespectful,’ with some tweeting that they thought she was ridiculing Afghan women who are compelled to wear face-covering burqas.

Another discourse that has been doing the rounds on social media regarding the clothing surrounded the double standards of fashion, with one user arguing that ‘it’s oppression in the East and somehow ‘fashion’ in the West’.

Another questioned how it is considered ‘avant-garde’ for the American fashion icon to take to the Met Gala 21 but ‘oppressive’ for women in Afghanistan.

Why do we continue to live in a society where we keenly wait for a superstar to set a trend, and then everyone starts aping them? These cultures of women dressing up unassumingly or veiled have been going on for decades in all religions – Islam, Christianity and so on. We don’t need celebrities to set examples of fashion trends.

The bottom line: these things shouldn’t be taken for granted for trendsetting or emulated to look great because some women are indeed oppressed and are forced to wear it.