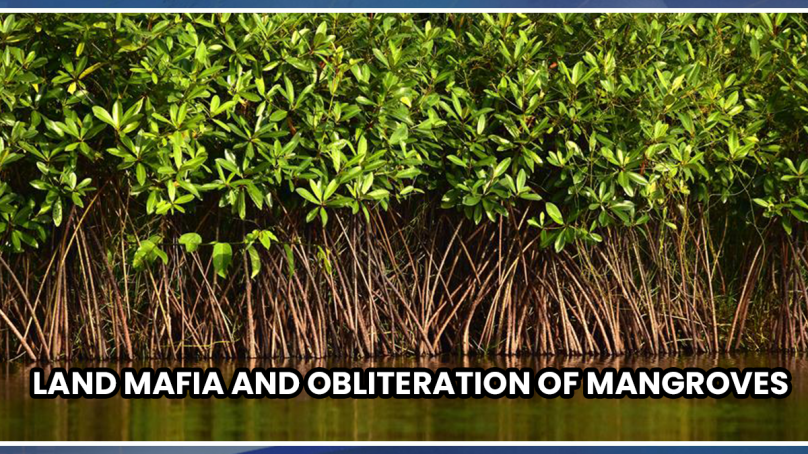 Land mafia and obliteration of mangroves

We all know that trees are the oxygen of ecological life that not only cleans the atmosphere of density but also absorbs toxic gas, carbon dioxide, so that we can breathe clean air. An important aquatic plant on Pakistan’s coastline, also known as mangroves, is a natural blessing that is being ruthlessly eradicated, but unfortunately there is no one to ask. Did you know that the number of Tamar forests in the world is very small and this invaluable treasure, spread over the Indus Delta in Pakistan, stands at number seven.

Before we move on, it is important to know whether there are Tamars or mangroves, and why these are necessary.

The tree is called Tamar in Urdu and other languages ​​of the subcontinent, while in English it is called Mangrove. Produces oxygen and shoots and leaves cool the beach atmosphere by producing oxygen in the atmosphere. The same species of mangroves is now found in Pakistan. Temar is its local name, while its scientific name is Avicennia marina. Tamer or mangroves are small-leaved plants whose roots are submerged in water and go several feet down. The roots of the mangroves hold the ground very tightly, which prevents ocean erosion, while storms and floods at sea are a natural way to survive. Not only do they reduce its severity, but they also act as a protective bridge against a catastrophic threat such as a tsunami.

You may remember when the monster of the Mercy Tsunami that hit the Arabian Sea in 2004 hit many countries including India but Pakistan remained safe because of mangrove forests. It is home to a variety of prawns.

But the sad fact is that these mangroves, which saved Karachi from terrible hurricanes and floods, are now suffering from traditional apathy and destruction.

The mangrove ecosystem faces three problems. The first is the construction of human settlements within mangroves in coastal areas. Another problem is the migration of people from their huts around the Delta to other areas for employment. These families are now providing labor force in nearby cities.

The third issue concerns biodiversity. There was a time when there were a dozen or more species of mangroves, but now we have only one type of mangroves left. The government has not done much to save the depleted mangroves. And unfortunately, these efforts are aimed less at solving the problem and more at publicity in the media.

The fourth major problem is the unnecessary logging of timber, the addition of contaminated chemical water from industries and factories. Due to which not only plants but also aquatic creatures are being harmed.

In July 2020, the then Provincial Minister for Forests, Information and Local Government, Sindh, Syed Nasir Hussain Shah had stated in his statement that more than 2 billion mangroves have been planted in various coastal areas of Sindh which were computerized for the first time in the history of the country. Mangroves are being planted and computerized. He also said that large scale mangrove tree planting was an important initiative of the government which would generate more than Rs. 10 billion in revenue which would be spent on the welfare of the concerned local people and population.

Syed Nasir Hussain Shah also said that the production of mangroves in Sindh has almost doubled since 2008 and Sindh has set three world records for the highest number of mangroves in the coastal areas of Sindh. But the news that is coming at the moment is very worrying, according to which the construction process has been started by cutting the eco-friendly mangroves in Hawke’s Bay and there is no one to ask. It is important to know that the presence of mangroves in the coastal areas preserves the natural environment there while on the other hand they are also a protector for the beaches from the scattered waves of the sea.

Did you know that mangrove plants are 18% more capable of absorbing carbon dioxide than other plants and that is why they are called environmentally friendly? This is very important for the coastal strip of Karachi because unfortunately where Karachi is facing other problems, it also has to face the challenges of environmental pollution risks.

Now let’s move on to the news that the occupation mafia has not even left the sea and the process of cutting mangroves on the coastal strip of Karachi is in full swing while illegal plotting is rampant while debris is also in the sea. As a result of this illegal plotting, not only the forests of Tamar are endangered but also these settlements are spreading near the national facilities when immediate action is required. Surprisingly, no one is involved in this illegal plotting. Not to be outdone, while matters are limited to paperwork.

In this regard, in any attempt to talk to any institution, only concerned concerns are being expressed by the concerned institutions. Plotting on fake papers is going on in many goths while forest lands are also under its siege. It is a bitter truth that conflict between institutions for their own interests is not a new thing in Pakistan. The shadow of the conflict continues to hover because the trees belong to the forest department while the land belongs to the revenue department. Therefore, any kind of disagreement between them has to bear the brunt of the damage to the environment. And at present, the mangroves on the coast of Karachi are facing serious threats.

There is a need to change the relevant laws to save the mangroves while forest land should never be used for commercial purposes.

There’s a pressing need to save the mangrove forests along the Karachi coast, including re-supply of clean water to the Indus Delta, ban on dumping untreated sewage into the sea, construction of housing schemes and other commercial needs. There is a need to prevent deforestation and create awareness among the people.