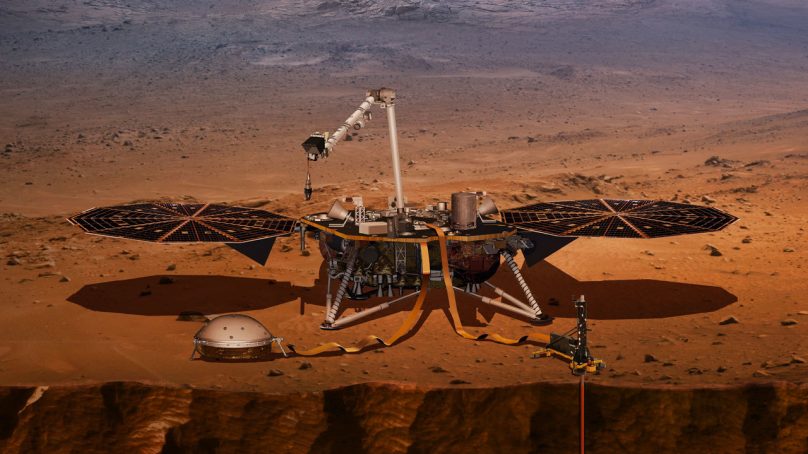 The InSight probe from the US Space Agency (NASA) recorded the first earthquake on Mars.

It is the first time that humans detect a seismic signal on the surface of a body other than the Earth and its Moon.

The first proof that earthquakes also take place on Mars was captured by the ship’s sensors this April 6.

The scientists responsible for the discovery say that the source of this phenomenon could be the movement in a crack inside the planet or the tremor caused by the impact of a meteorite.

InSight, the first probe to explore the “heart” of Mars, landed on the red planet in November last year after a complex descent.

The mission – which combines the efforts of NASA with several European partners – is a pioneer in placing seismographs on Martian soil to analyze “the entrails” of the planet.

The finding could help build a clearer picture of the inner structure of Mars, from the crust to the mantle and core.

The results could be compared with the characteristics of the Earth, with the aim of learning more about the different ways in which these two planets have evolved .

The scientists in charge of the mission assure that the signals registered by the probe remind them much to the data collected by the sensors of the Apollo ship on the lunar surface between 1969 and 1977.

At that time, a team of astronauts installed five seismometers that measured thousands of earthquakes in the only natural satellite on Earth.

This instrument, known as the Seismic Experiment for Interior Structure (SEIS), was located on the Martian surface by the robotic arm of the probe on December 20.

On April 6, both parts of the system observed the signal, although it was not possible to reach a definitive conclusion about the probable source of the earthquake or the distance from the probe to the event.

“It’s probably only an event of magnitude between 1 and 2, maybe with a range of about 100 kilometers, there’s a lot of doubts about that, but that’s what it seems,” says Professor Tom Pike, who leads the British team. in charge of the seismometers.

Experts have clarified that very few people would notice an event of this magnitude on Earth,

However, these were even smaller than the previous one and scientists still do not have the security that they are real seismic events.

The mission of the probe is programmed for a duration of two Earth years, which is equivalent to just over a Martian year.

Professor Pike calculates that, taking into account the time needed to make this first detection, the InSight probe should register a dozen seismic signals in the initial operation period.

Image caption The first image of Mars sent by the InSight probe, after landing on the red planet in 2018.

“When you’ve only registered one, you do not know if it’s just luck, but when we see two or three we’ll have a better idea,” he says.

“Of course, if we confirm the other three, we could expect a lot of detections in the next two years.”

The InSight probe left for Mars on May 5, 2018, and its landing on November 27 of that year is considered an important achievement.

Landing on Mars is so difficult that about two-thirds of previous attempts ended in failure.