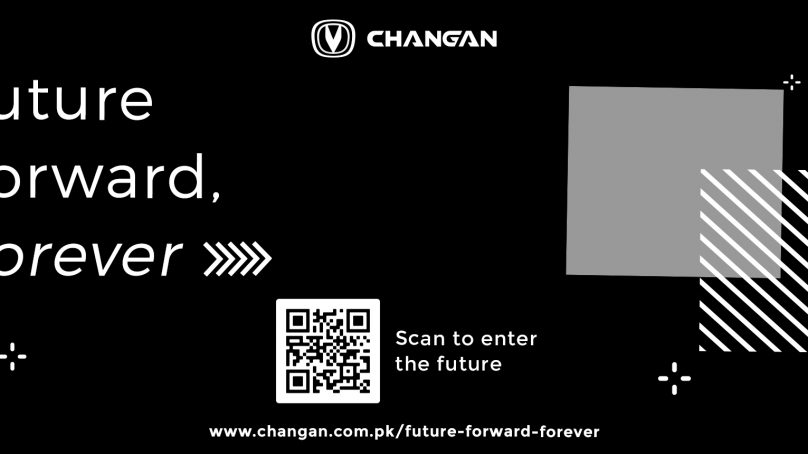 Danial Malik – CEO of Master Changan Motors states, “The Future is here, it is just not evenly distributed. Changan Pakistan is here to change that by bringing the future to Pakistan and indigenizing autonomous mobility. Changan Auto is the leader in advanced mobility technologies in China, and we see no reason why we cannot introduce them in Pakistan. We aim to catalyze a safer tomorrow by bringing to Pakistan the very best in global autonomous technology.“

“Master Changan’s vision of “Future Forward, Forever,” is the driving force under which we are testing proprietary Artificial Intelligence-based autonomous driving technologies and adapting it to Pakistani roads.”, he added.

As Danial Malik has previously stated in an interview that “we (at Master Changan) believe people don’t buy what you sell, they buy why you sell it – and with Master Changan, we have a very strong why; a why which runs through our people, products, plants, offices, and everything we do”.

As soon as the teasers were released on Changan Pakistan’s Facebook page, Pakistani social media was abuzz with palpable excitement and a clamoring to see such technologically advanced vehicles being potentially introduced to the Pakistani market.

Changan Pakistan is conducting the technology testing on Changan UNI-T. It is the automaker’s first vehicle as part of a new product series called “UNI”, which leverages several futuristic technologies in tandem with a unique, avant-garde design.

The futuristic UNI-T comes equipped with an AI-chip-based intelligent vehicle system, creating a best-in-class human-machine interactive experience. The driver can interact with the system through a dual-screen touch interface, intelligent voice activation, and a facial recognition system, enabling a multi-sensory experience that gives everyone sitting in the vehicle the feeling of having entered a futuristic science fiction world.

The future-forward, spaceship-inspired design of the UNI-T has instantly stunned the people of Pakistan. The front of the UNI-T forms the basic concept around which the silhouette of the entire vehicle evolves. The trapezoid-cut integrated diamond grill is enhanced by the strongly defined LED lights, split headlamps and flushed door handles perfectly blend into the motion and tension of the body curve. The V-shape tail wing is not only stylish and bold but also guides the airflow, yielding an eye-catching design that combines both aesthetics and functionality.

Changan UNI-T possesses Level 3 autonomous driving capability, which means that in the first iteration, the driver will not need to continually keep his or her eyes on the road. In later iterations, the driving experience will move onwards to the hands-free and feet-free stage. The vehicle has a fully autonomous driverless self-park technology which is leaving people awestruck while being tested on the roads of Pakistan for the first time ever.

It is pertinent to note that Changan Uni-T is equipped with the same BlueCore NE1.5T engine that had won the Guinness World Record title of “Longest Live Video Broadcast” held at Chongqing Changan Automobile Global R&D Center in December 2020. The Blue Core NE 1.5T engine was tested non-stop for up to 259 hours maintaining the engine speed above 5500 rpm– indeed a true test for the reliability and stability of the engine.

Changan Auto is China’s largest automobile brand ranking number one in R&D for the last ten years consecutively. Changan Auto has built a new industrial ecology with Tencent, Huawei, and other partners. In the past three years, the company has made significant strides to innovate and step into a new era of development. In the field of new energy and intelligence R&D, Changan Auto has mastered more than 500 key technologies, 48 of which are the first of their kind in China. The company has sold nearly 1.2 million intelligent networked vehicles, taking its ranking amongst the top auto companies globally. Changan Auto has also developed a 7-in-1 integrated electric drive system, with intelligent battery management. In 2020 Changan Auto won the 1st place award in the consumer satisfaction survey by China Consumers Association. Changan Auto has over 20 million customers globally and has a grand vision for the year 2030. It aims to transform into an intelligent and low-carbon mobility technology company, all the while building new efficiencies and software capabilities into its core competencies.

Shabbir Uddin – Director Sales & Marketing while commenting on the introduction plan said, “While the UNI-T remains its most ambitious vehicle, it is just the tip of the proverbial iceberg. Once the host of technology is tested and approved by Changan Auto’s global R&D Centers, consumers in Pakistan will also get to experience these technologies on Pakistani roads in several different future models.”

“For decades, the automobile consumer of Pakistan has been neglected; a major reason why the industry is still in a struggling phase when it comes to making bold bets on technological advancements. Master Changan Motors has begun a Future Forward movement in the automobile sector of Pakistan by bringing in new technologies and innovative products. You can learn more at www.changan.com.pk/future-forward-forever”, he added.

In line with this approach Master, Changan Motors has ensured that all of their products have best in class features, technology and international level built quality resulting in their rapid popularity in the local automobile industry. Earlier this year, Master Changan had introduced Changan Alsvin’s smart sedan which offers numerous First-in-Pakistan and First-in-Class features like Euro5 BlueCore engine, Dual-Clutch Transmission, Sunroof, Cruise Control, Start-Stop Technology, and TPMS to name a few. The launch itself was unorthodox and created a buzz in the automotive scene. The deliveries have started nationwide and thousands of kids will be celebrating this Eid enjoying their brand new Changan Alsvin’s Sunroof.

Changan Auto also has a wide range of beautifully designed and high-quality sedans, SUVs, MPVs, LCVs and is well on its way to electrifying all its models by 2022. In their next phase, Master Changan Motors plans to introduce these electric vehicles in Pakistan as well. industry. As for the UNI-T, it is only in the testing stage, the next Changan vehicle to enter the market is yet to be unveiled; although it is touted to be a game-changer in the near future

Master Changan Motors Limited acquired Greenfield status under the Auto Policy 2016-2021 and entered into a Joint Venture with Changan Auto with an investment crossing $136 million. The company established a plant in Karachi with an annual production capacity exceeding 50,000 units. Changan Auto has selected Pakistan as a strategic export base for right-hand drive countries. This will be the first time in the history of Pakistan that locally made vehicles will be exported out of the country.