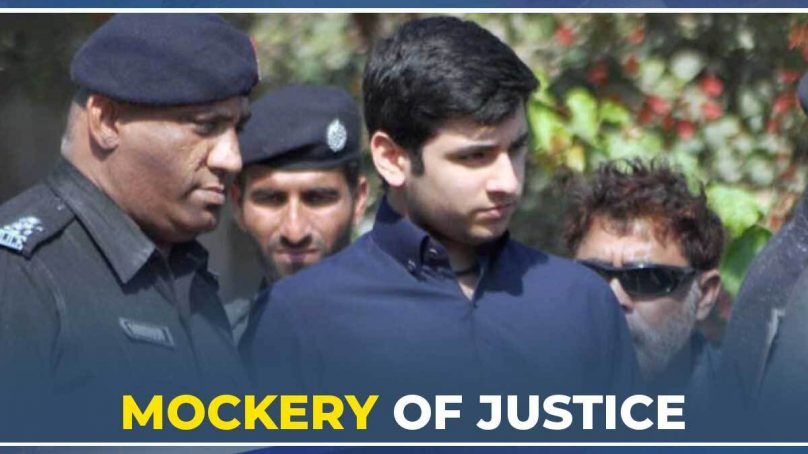 In Pakistan wealthy and powerful people accused of committing crimes often go scot-free by manipulating the flawed legal system while criminals from poor or not-so-influential families are executed. The acquittal by the Supreme Court of Shahrukh Jatoi, son of an influential feudal lord of Sindh, as well as his co-accused amply testifies to this unfortunate fact.

To recall, Shahzeb was brutally murdered in an act of vengeance by Jatoi and his accomplices after the young boy wrangled with the men, who had been harassing his sister. The primary accused managed to flee Pakistan despite being named in a murder case; nonetheless, he had to return to the country on court orders. A bizarre legal saga that had the victim’s parents pardoning the accused after an ATC had sentenced them to death for the victim’s murder followed. The death sentence was later commuted to life imprisonment by the Sindh High Court, which also ordered a fresh trial. The defendants were ultimately exonerated by the top court after they appealed their cases there.

It is important to ask as to the grounds upon which the defendants were acquitted; it’s an open secret that the family was under immense pressure to arrive at a resolution of the case. The family of Nazim Jokhio, who was allegedly murdered earlier this year at the behest of two PPP MPs, has also filed a compromise petition in a related case, despite the victim’s mother’s prior claims that they were being pressured by the suspects.

These legal flaws must be remedied in order to prevent more wealthy and powerful criminals from walking free after “buying justice” through so-called compromise or ‘settlement’. Legal experts note that even if religious edicts are invoked, murder should be a non-compoundable offence and that heirs can only pardon if the killing was not planned in advance. Strong evidence suggests that both victims in the aforementioned situations were killed in order to hurt a powerful man’s pride.

The office of Pakistan’s attorney general has said that it will submit a review petition in the Shahzeb murder case “in the interest of justice” because the AGP’s opinion was not taken into consideration. In the cases of Nazim Jokhio and Shahzeb Khan, it is expected that justice will be served.

The gaps in Pakistan’s criminal justice system, which allow powerful prisoners to escape punishment even for the most egregious crimes, need to be urgently addressed.