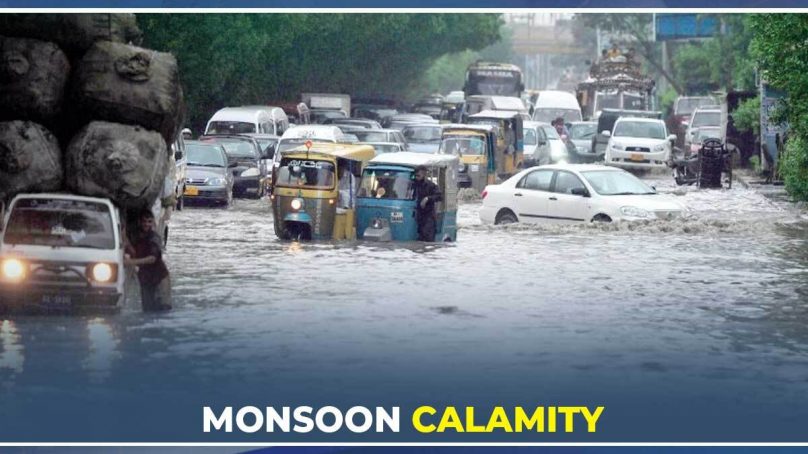 Unlike previous years, heavier-than-normal rains have pounded large swathes of the country, claiming several lives and damaging roads and civic infrastructure. Flash floods and unban flooding, as per news reports, have killed nearly 150 people over the last month, with Balochistan hit particularly hard. Sindh has also seen many rain-related incidents and deaths, with most fatalities reported from Karachi. Whenever it pours down in Karachi, inundated roads and homes, the fear of electrocution and life grinding to a standstill are the typical occurrences. This year’s rainfall is no different and has laid bare the Sindh government’s appalling performance and its claims of having taken all possible measures to avoid death and destruction in the country’s financial heart. The city’s Keamari and East districts, which received the heaviest rainfall over the weekend and into Monday, as well as other neighborhoods, all experienced urban flooding as a result of the precipitation.

The annual monsoon tragedy in Karachi is blamed on a number of reasons. These include encroachments, a lack of planning, unusually heavy rains, and climate change. Perhaps it wouldn’t be incorrect to suggest that a number of factors are responsible for the havoc. All government agencies were forced to look into finding a solution to this major issue in the country’s commercial center as a result of the excessive rains in 2020. The Supreme Court mandated the removal of encroachments surrounding drainage systems, and the provincial government also sprang into action after the then-prime minister announced a Rs. 1.1 trillion package to “transform” the city.

Two years later, not much has changed, and it is evident that the civilian administration, those in charge of DHA, and those in charge of the cantonment regions have not learned many lessons from previous catastrophes. While it is true that Karachi has endured years of federal, provincial, and local government neglect, a concerted effort from the highest levels of government is required to properly address the urban flooding problem.

There is an argument that even more advanced cities experience urban flooding. Even while that is likely the case, it cannot be used as an excuse to abandon Karachi and let the dreadful annual ritual of rain-related death, dislocation, and damage continue indefinitely. The state should consult local or foreign topographical and urban planning experts to formulate a plan to lessen the risk of floods, and their recommendations should be seriously enforced.

The Met department has forecast heavy rains for the next few days. In the long run, Karachi’s residents would be forced to deal with the gushing floodwaters on their own without improved drainage and an urban disaster response network. Therefore, the administration must have backup plans in place to better handle the upcoming wet season.