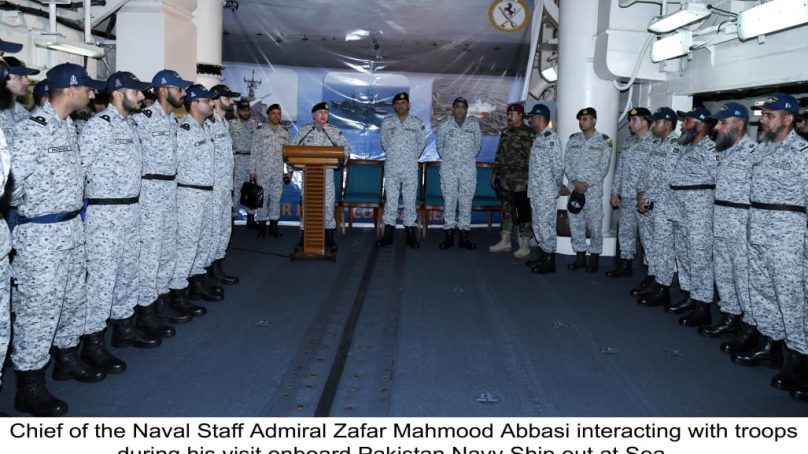 On arrival at Naval Air Station Turbat, the Naval Chief was comprehensively briefed on operational plans, deployment of Pakistan Navy aviation assets and various operations being undertaken during the Exercise. Later, during visit to Gwadar, the Admiral was appraised on different operations, plans and readiness of deployed troops along Makran Coast. On completion of briefings at Command Centers, Chief of the Naval Staff boarded Pakistan Navy Ships operating at sea. The Naval Chief was given detailed briefing onboard Pak Navy Ships on Fleet operations and various plans being undertaken during the Exercise Seaspark 20.

Later, while interacting with troops, the Admiral expressed his satisfaction on operational readiness of Pak Navy assets and professional excellence of troops for ensuring robust seaward defence. Naval Chief appreciated troops morale, resilience to serve under multi-threat environment and readiness to surprise the enemy. While addressing troops, the Admiral also touched upon detection of adversary’s submarine during Post-Pulwama standoff as manifestations of Pak Navy’s professional excellence.

The exercise SEASPARK-20 is a display of strong resolve and capabilities. Pakistan Navy being multi-dimensional force is determined to stand against any aggression posed by the enemy and safeguard maritime frontiers of Pakistan.