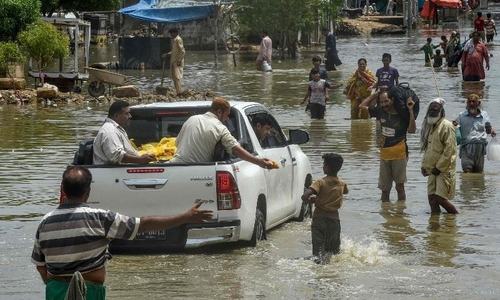 Karachi is my city. When people see me, they ask if I am from Karachi. I smile and say: Yes! I was born in the city of Quaid and I am proud of that. However, I have spent very little time there, but whenever I have to go there, I feel a love and affection for the city. A lovely city that has a climate but is being treated unfairly; a city the rulers of which are asleep at the switch, loath to take a semblance of action to protect it from permanent decay. The city has been witness to gross mismanagement, blithe apathy, and inaction for many decades now.

I now live in Islamabad and have always seen that all the rain gutters etc. are cleaned before the monsoon. This cleaning is necessary so that when it rains, the flow of water is not obstructed, so it doesn’t make its way into residential areas. There is a natural canal in every sector of Islamabad which has been surrounded by the city administration and has been made safe for the citizens by constructing small bridges so that it is easy to cross the canal and people are safe from falling into it due to the fence.

All the arrangements are completed before the rainy season, cleaning of drains and gutters and also warnings are issued to the citizens. There are no big billboards in Islamabad as they too can be a big threat in rains and storms but the upside is flowing in Karachi. The city of Quaid has no personnel. I also wrote a column on this subject before the monsoon last year. I also gave some suggestions to save an industrial hub like Karachi from the ravages of rain, but nothing happened. Sometimes people in Karachi die of heat, sometimes they suffer from a heatwave, sometimes they die of electrocution in the rain and sometimes they drown in flood waters. This time too, the situation in Karachi is not looking up.

Heavy rains lashed Karachi on Wednesday. With the first rain, social media was filled with citizen tweets and statuses. Some people said that the power went out with the rain, water stagnated in some places, leaving the citizens trapped in their homes. A social media user tweeted that as soon as the first drop of rain fell, power went out from Karachi. Citizens in Malir, Gulshan-e-Iqbal, North Nazimabad, Liaquatabad, Lyari, Buffer Zone, Clifton and Defense areas were complaining of prolonged power outages.

Heavy storms and rains are part of normalcy in Islamabad but there is very little light here. A 15-year-old boy and two sacrificial animals were electrocuted in Malir Halt. There was electricity in the poles in the rain but a large number of citizens were without electricity. Traffic was also severely affected as many highways were submerged. In all these circumstances, the provincial government kept saying that everything is fine in Karachi. The posh areas of Karachi were in the same situation as other areas, water accumulated on the roads, people were trapped in their houses, some people’s vehicles were flooded, some people’s houses were flooded.

Rain protection arrangements are made before the monsoon. However, the provincial government of Sindh has been using the slogan of “all is well” as far as social media is concerned, but the citizens and the media open up the whole pool of their claims. It is important to clean rivers, drains and gutters before heavy rains, repair electrical appliances and remove large billboards. In addition, it is important that all emergency services remain active and provide immediate assistance to citizens in the event of any untoward incident. The provincial government believes in word of mouth.

In this regard, an emergency relief helpline needs to be set up to help people stranded in and around Karachi in the rains and floods.

Rains have also started in other parts of the country and this is the first spell of the monsoon. As dams fill up with rains, excess water is also discharged from the dams, although more small dams should be built and every drop of water saved. The release of water from dams inundates nearby and low-lying areas and floods some areas, so it is important to store rainwater. On the one hand, this water will be useful in agriculture and on the other hand, it will not cause flooding.

Rainwater can also be stored in homes in underground tanks and used for watering lawns, plants and washing cars. In the same way, the administration should use rainwater safely, the same should be done by the societies.

When the heat-stricken people get a little relief from the rains, power goes out. In low-lying areas, houses are flooded and vehicles submerged. The relief of two bridges turns into trouble due to government mismanagement. Last year also, the houses of the citizens in Karachi were flooded and people lost properties and vehicles worth millions. There were loud announcements of aid from the government but no one got anything. The situation seems to be the same this year. The first rain in Karachi became a nuisance.

Many people died last year due to electrocution. It is the administrative negligence of the electrician that it was dark in the houses but many people died due to the electric current in the poles. With a little bit of attention, this problem can be easily solved, but no one cares, maybe the lives of ordinary people don’t mean anything to them.

According to the Meteorological Department, the current series of rains will continue till the end of the second decade of July. The question is whether Karachi can afford it. Apart from Karachi, many low-lying areas in Hyderabad, Badin, Mirpur Khas and Thatta were also inundated, but look at the fate of Karachi where more than 400 feeders tripped and Pakistan’s mega city sank into darkness. On the one hand, cattle markets are closed due to the big Eid; on the other, the rains have started, which calls for better planning and management.

The situation in KP is similar to Sindh where rain water entered Ayub Medical Complex from where patients had to be evacuated. Abbottabad is facing floods, and people there have appealed for help by uploading pictures and videos of roads and houses. In Punjab too, rain water flooded Sialkot. Water and electricity supply was also disrupted in several low-lying areas of Lahore. However, the bureaucracy there seems to be working as fast as it can because the rest of the Punjab is not as fast as Lahore. Management should prepare before it rains, not after, and work for the public, not for social media.

Eid, Covid-19, the summer holidays and the monsoon are all together and this is the real time to evaluate the performance of departments and governments. Provincial governments should step in and protect the people from the ravages of the rains.

This article is originally written by Javeria Siddiqui.