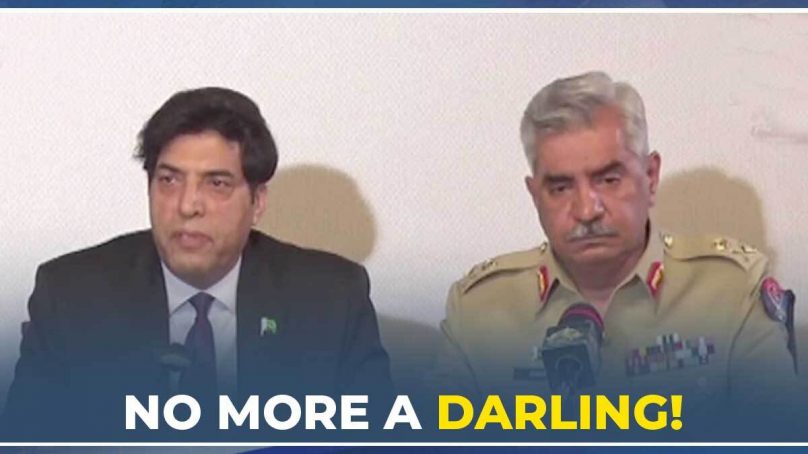 THE military on Thursday dropped a bombshell as it sought to reassert itself ahead of the PTI’s announced long march on the federal capital. The military deployed its big shots to respond to recent allegations and speculations that it was involved in the murder of journalist Arshad Sharif.

The country’s top intelligence agency’s chief spymaster, the DG ISI, talked to the public in a joint press conference with the military spokesman for the first time in the nation’s history.

Lt Gen Nadeem Anjum, who usually chooses not to be in the limelight, unlike his predecessor, expressed at length his outrage at those deprecating the armed forces, claiming he was “forced” to make an appearance and set the record straight because his institution and its people were being assaulted mercilessly.

The DG ISI didn’t hold back as he rejected the Cablegate controversy and denounced the PTI for lambasting the army leadership.

The spy chief also disclosed that the army chief in March received an unlimited extension in exchange for blocking the no-confidence vote.

He further revealed that since then, President Arif Alvi has served as a mediator in two meetings, and in both meetings, Mr. Khan has been informed that anything he wants must be obtained through the Constitution and the legislation. In those discussions, Mr. Khan most certainly pressed the army to put pressure on the government to announce early elections.

Backdoor negotiations appear to have reached their nadir given that the DG ISI himself had to hold a press conference to refute the PTI’s account. In the short term, it appears that efforts to reach a compromise between the PTI and the PDM, quiet Mr. Khan, or persuade him to change his position have failed.

Internal unrest is currently the country’s largest threat, according to the DG ISPR, who stated this during the press briefing. This seems to be a warning to the PTI not to think about doing anything that would upset the status quo during its long march.

The PTI and the military have split up in a very public way. There is no longer any doubt that the military establishment, particularly the ISI, was instrumental in the rise of the PTI. In order to help the party establish a government, it brought round the smaller parties and independents to do so.

It’s hard to predict how the two will settle their differences at this point. The PTI has been cautious in its approach, perhaps realizing the seriousness of the issue. Instead of attacking, it adopted a defensive stance, emphasizing that it has just asked for an early election in both private and public forums and that it still plans to carry out the long march while ensuring it is peaceful.

However, it did question why the army felt the need to hold this press conference if it was politically neutral. It is a concern that merits deliberation.

There are other lessons to be learned in the meanwhile. The civil-military chasm we see today was inevitable given how the establishment continuously meddled in political and civilian issues over decades. While the Pakistani people have always loved and will continue to adore their armed services, their support should not be seen as unconditional.

It is there for those who give their lives to protect the country from enemies, not for those who manipulate the country’s political system. Can it be hoped that the experience has eventually taught at least this one lesson?