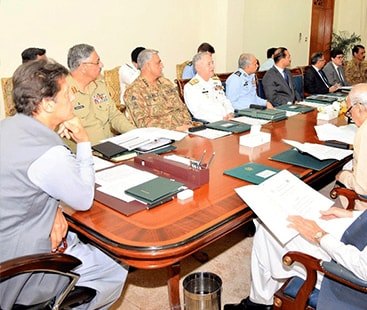 The Committee discussed situation arising out of unilateral and illegal actions by Indian govt, situation inside Indian Occupied Kashmir and along the Line of Control (LoC).

The Committee has decided to review bilateral arrangements, take the matter regarding revocation of Article 370 and 35A to the United Nations, including the Security Council.

It was also decided in the meeting that 14th of August to be observed in solidarity with brave Kashmiris and their just struggle for their right of self-determination, whereas, 15th of August will be observed as Black Day.

Earlier on Tuesday, Prime Minister Imran Khan formed a seven-member committee to review the political, diplomatic and legal aspects of the occupied Kashmir.