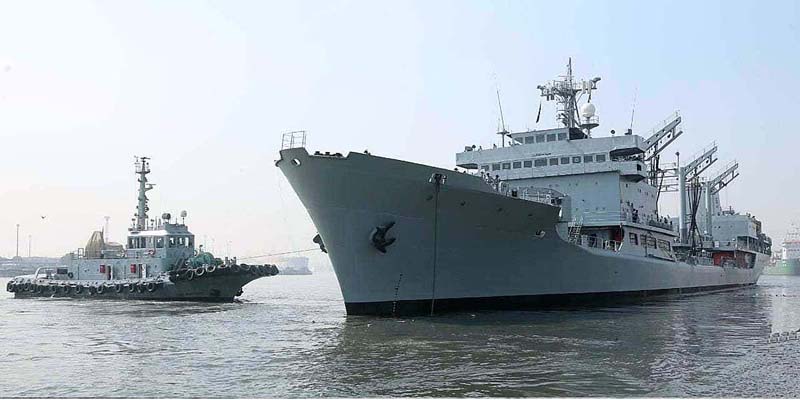 Modern navies are helping international countries achieve their foreign policy goals through port calls, multilateral and bilateral activities and drills. In short, modern states use maritime diplomacy to increase their reach in remote areas of the world where access is sometimes limited in other ways to promote security and prosperity measures. The Pakistan Navy has a rich history of engaging with various countries globally. Recently, once again on the African continent, the Pakistan Navy ship Nasr paid a humanitarian visit to the disaster-stricken areas to promote joint service to humanity.

The Pakistan Navy is committed to protecting Pakistan’s maritime interests, preventing aggression in its territorial waters, dealing with natural disasters, and ensuring the delivery of humanitarian aid. Under these guidelines, the Pakistan Navy is participating in regional task forces and providing humanitarian assistance to developing countries around the world, especially the African continent. In keeping with its tradition, the Pakistan Navy’s Ships Support and Origin visited the ports of eight African states, including Morocco, Mauritania, Ghana, South Africa, Tanzania and Kenya, from November 2019 to February 2020. During these visits, free medical camps were held as well as diplomatic activities to fill the gaps in relations with African countries and to further strengthen mutual efforts to achieve common goals.

Recently, the Pakistan Navy has launched its aid ship Nasr Africa under the government’s ‘Engage Africa’ policy, which will help enhance bilateral relations and find new avenues of cooperation with African countries. PNS Nasr will provide humanitarian assistance to African countries, including Djibouti, Sudan, Benin, Niger and Kenya. During a recent visit to Benin and Niger, the Pakistan Navy ship Nasr, as a symbol of solidarity and friendship, provided food aid to both countries during ceremonies in Port Cotonou, Benin. Earlier, the Pakistani navy ship Nasr donated similar food items to the people of Djibouti and Sudan. The recent deployment of a Pakistan Navy ship in the African region is an attempt to further strengthen relations with African countries. The Pakistan Navy’s ongoing humanitarian engagements are proving to be instrumental in Pakistan’s engagement in Africa policy.

Benin, Niger and Pakistan enjoy cordial and friendly relations as they are members of joint international forums, including the Organization of Islamic Cooperation and the Group of 77. Benin is bordered by Niger to the north and the population of the two countries is about 12 million and 23 million. The importance of these two countries is due to their geographical location in the way of maritime trade rather than the direct market of goods. Some companies involved in Pakistan’s grocery business have recently set up offices in Benin to coordinate exports from Pakistan to the African region. Benin is a potential market for rice, pharmaceuticals, cosmetics, textiles, chemicals, fisheries, confectionery, agro machinery and chemicals. Benin imported goods worth 45 45.938 million from Pakistan in 2018-19, with rice and medicine topping the list.

Given the importance of the African continent, the Foreign Office has developed a long-term policy that focuses on economic diplomacy, regular engagements of ambassadors to the continent, and digital diplomacy. Foreign Minister Shah Mehmood Qureshi also repeatedly stressed that Pakistan’s goal is to make Africa an important part of its foreign policy. The Foreign Minister signaled a shift from geopolitics to geopolitics, stressing the importance of economic diplomacy as a key component of modern diplomatic practice. Under this, Pakistan has increased the number of resident missionaries in the African region from 13 countries to 15 countries and despite the challenges of Covid-19, Pakistan’s trade with Africa has increased by 7%.

As a result of this policy, there has been a significant increase in bilateral cooperation with African countries in various fields. In this context, relations between Pakistan, Benin and Niger have also been improved through recent talks and bilateral activities. It is important to note that successful diplomacy is a continuous process and requires periodic review and change. Pakistan’s Ministry of Foreign Affairs continues its efforts to enhance bilateral trade and economic initiatives with African countries, while the Pakistan Navy provides assistance to the Ministry of Foreign Affairs through its successful international port calls and humanitarian missions abroad.