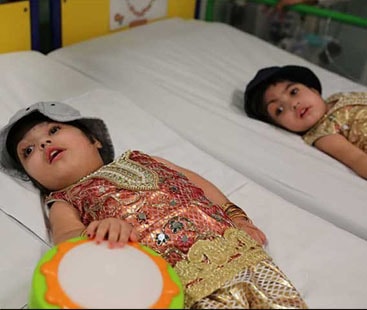 Safa and Marwa Ullah, the two-year-old conjoined twins from Pakistan, were separated following a ‘miraculous’ surgery in London.

Great Ormond Street Hospital or Gosh had over 100 members involved in the rare medical procedure that took place over four months and four stages of a separation process.

In a statement issued by Gosh, the twins were born in January 2017, conjoined at the head — known as ‘craniopagus’ twins. The family did not know that it was a twin pregnancy, so they were a bit of a surprise when they arrived.

We’ve an incredible story to share with you: conjoined twins Safa and Marwa have been successfully separated – the first such procedure at @GreatOrmondSt since 2011! Discover their extraordinary story. https://t.co/aKrOCMGu3q 🎉🏥 pic.twitter.com/zePGMMrdIt

“After consultation with their doctors in Pakistan, Great Ormond Street Hospital welcomed them to Bumblebee Ward in autumn 2018 and set about a four month four-stage separation process involving multiple specialties across the hospital — from craniofacial, neurology and psychology experts, to nurses, radiologists and physiotherapists,” the hospital further stated.

The first few procedures involved separating the brains and blood vessels. Following this, a piece of plastic was placed between the two brains two internally have two separate children on the operating table.

The focus then shifted to the skull and the skin, with tissue expanders used to stretch the skin. This was followed by the reconstruction of the top of the heads with their own bone and covering it up.

After a period of recuperation and intensive physiotherapy, the twins were finally discharged from the hospital earlier this month and are now recovering well at home with their family.

According to the BBC the girls, from northern Pakistan, had their final operation in February, which was paid for by Pakistani businessman Murtaza Lakhani.

The girls’ mother, Zainab Bibi, 34, was quoted as saying: “We are indebted to the hospital and to the staff and we would like to thank them for everything they have done.”

The journey hasn’t been without complication, with Bibi losing her husband to a heart attack two months before the birth.

Following the delivery, Bibi continued to struggle to find medical help for the twins before connecting with neurosurgeon, Dr Noor ul Owase Jeelani who invited her to London with the children and helped connect with wealthy businessman Lakhani who sponsored the operation.